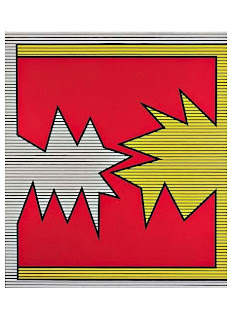 There is some discussion of Nicholas Krushenick as the first pop abstraction, and since I saw this (ZAP!) (POW!) painting at John Ravenal's newly hung nether room of the Sydney and Francis Lewis collection in the Virginia Museum of Fine Arts after Fred Brandt's retirement (with a large painting by Patrick Caulfield on the adjacent wall), I wouldn't argue too much...however as I am tracing ideas and social groups of artists and the earliest I can research these paintings appearing is in the later sixties (and in a very long interview I found online Krushenick himself discusses a very different kind of work based on collage up until starting this series) he is the next in my online curated exhibition Pop Aporia.


The painting is titled Jungle Jim Lieberman. In the Museum online collection it is listed following title thus:

And just as an aside, in my eight months I replaced my good friend Caryl as Secretary to the Curators while she worked on a catalogue for an architecture show, I Iearned to work with those numbers at the bottom - and work with a lot of other archiving and information as well. Mr. John Ravenal worked for the Philadelphia Museum before replacing Fred Brandt on his retirement as Curator of Modern and Contemporary Art at the Virginai Museum of Fine Arts, and his first exhibition as associate curator was No Title: the Collection of Sol Lewitt at Wesleyan University in 1981 followed by co-curating with Andrea Miller-Keller From the Collection of Sol Lewitt originating at the Wadsworth Atheneum in 1984 and travelling extensively around the US including a stop at NYU's Grey Art Gallery.
Posted by Lori Ellison at 1:24 PM