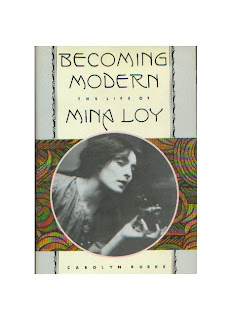 Mina Loy drew a portrait of Papini while living in Florence - she was fascinated by the editor of the journal Lacerba, an Italian neologism for Acerba with the French article as it would be in French, L'acerbe.

This is the really brief Wickepedia entry for Papini which doesn't even mention Lacerba:

Papini was born in Florence as the son of a modest furniture retailer (and former member of Giuseppe Garibaldi's Redshirts) from Borgo degli Albizi, Papini was baptized secretly to avoid the aggressive atheism of his father, and he lived a rustic, lonesome, and precociously introspective childhood. From that time onwards he felt a strong aversion to all beliefs, to all churches, as well as to any form of servitude (which he saw as connected to religion); he also became enchanted with the impossible idea of writing an encyclopedia wherein all cultures would be summarized.

Trained as a schoolteacher, he taught for a few years after 1899, then became a librarian. The literary life attracted Papini, who founded the magazine Il Leonardo, together with Giuseppe Prezzolini, in 1903, then joined Enrico Corradini's group as co-editor of Il Regno. He started publishing short-stories and essays: in 1903, Il tragico quotidiano ("The Tragic Everyday"), in 1907 Il pilota cieco ("The Blind Pilot") and Il crepuscolo dei filosofi ("The Twilight of the Philosophers"). The latter constituted a polemic with established and diverse intellectual figures, such as Immanuel Kant, Georg Wilhelm Friedrich Hegel, Auguste Comte, Herbert Spencer, Arthur Schopenhauer, and Friedrich Nietzsche - Papini proclaimed the death of philosophers and the demolition of thinking itself. He briefly flirted with Futurism and other violent and liberating forms of Modernism (Papini is the character in several poems of the period written by Mina Loy).

Apollinaire himself wrote one of the many Futurist manifestoes which appeared in Papini's Lacerba, then temporarily the official organ of Futurism. For graphic designers and historians of typography, Giovanni Papini's 'Lacerba' introduced free typography in Italy . Most interestingly is how Papini ends up in the discussion of philosophy via William James, excerpted here:

" A constant and colorful feature of William James's writing is his generous appraisal of those individuals who left their impression on his mind. James's pages abound with cameo portraits of philosophers and scientists both famous and obscure, religious mystics, Viennese peasant women and Brockton murderers; these are major actors and anonymous bit players in life's drama. One of most intriguing of these supporting figures is Giovanni Papini. Best known, perhaps, are the references in Pragmatism where he emerges as the originator of the famous "corridor" metaphor. This scant evidence gives little indication of just how controversial a figure Papini turns out to be in the history of pragmatism in Italy. While James praises Giovanni Papini in the most extravagant terms for his originality, rhetorical flair, and uncompromisingly militant pragmatic spirit, this enthusiasm is not shared by others who have subsequently written on Italian pragmatism. Writers on both sides of the Atlantic have questioned whether Papini truly deserves the lavish praise that James so readily bestows upon him. "

This is from an article by Paul Colella from the Journal of Speculative Philosophy. I leave it to others to track down the Corridor metaphor to change the subject to the giant Mina Loy herself, the author of the only surrealist novel I was ever not only able to finish, but permanently impressed by titled Insel (Black Sparrow Press), who participated in New York Dada, Futurism, and Surrealism and for whom Duchamp wrote the catalogue essay for her exhibition in New York at Julien Levy gallery - they had maintained a friendship nearly their entire lives, when intersecting geographically. Her role in Futurism was at the center of a triangle of Marinetti and Papini's collaboration and rivalry in the earliest days of Futurism, but Papini was not to get alon with Marinetti much more on class differences as Marinetti was pampered son of a wealthy family in Milan and Papini had no such money or origins.

Specifically, Mina Loy had Marinetti as a frequent visitor when he was in Florence from Milan and he pursued her for quite awhile while she was more intrigued by, and felt Papini to be, her kindred spirit - Papini befriended her but withheld from anything further, so she did accompany Marinetti on a train trip and they were lovers for a time, but she thought his big theater entertaining but never took it terrifically seriously. Loy preferred Papini's knowledge of philosophy, and his poetry, and his acerbic rather than bombastic style. Papini and Loy were entirely kindred with her reading and English poetry and acerbic wit, and that other "Village Explainer" similar to Marinetti, Ezra Pound, proclaimed her one of the three poets worth reading in English very early on. (Gertrude Stein, who called Pound the Village Explainer, "fine if you are a village, if not, not" was a friend of Loy's in Florence where they were often found walking around together, and met Alice Toklas' approval as a close and enthusiastic reader of Stein's work.)
Posted by Lori Ellison at 8:44 AM