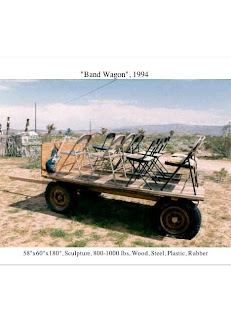 I want to thank John Mendelsohn for sending me this press release and drawing my attention to the artists in Los Angeles I had not heard of mentioned in this press release to a show at Jack Tilton several years ago to follow. (I have seen a major retrospective of Betye Saar in Florida in the last year and had long been familiar with both her and Alison Saar's work). Ed Bereal is more of a painter, however I am delighted to post both of these artists, especially Noah Purifoy who was born in 1917 in Alabama. this is just the beginning of his bio, on his website he has entire folk environments and bodies of work;

John Outterbridge has a little of his bio in the image I captured from his website, and here is the press release from the 2006 exhibition at Jack Tilton in its entirety.

NEW YORK – L.A. Object and David Hammons Body Prints will be on view at the Tilton Gallery from October 17 - November 18. The exhibition features assemblages by Los Angeles artists of the 1960s and 70s, and early work of the American sculptor David Hammons. An opening reception will be held October 17, from 6 - 8 PM, at the Tilton Gallery located at Eight East 76 Street.

This exhibition will feature a broad overview of the L.A. assemblage movement of the 1960s and 70s, including the most important West Coast artists often seen as the core of this genre. In addition, L.A. Object will seek to re-examine works by artists often left out of mainstream gallery and museum historical exhibitions. In particular, it will explore the important role of African American artists within this period. We will present works by Noah Purifoy, Ed Bereal, Betty Saar and John Outterbridge, among others, alongside works by their better-known contemporaries such as Ed Keinholz, Wallace Berman and George Herms.

L.A. assemblage grew out of the historical context of Dada and Surrealism at a moment when the poetry and underground films of the Beat generation, of which Wallace Berman was a member, were an influential force in California. Walter Hopps had brought important exhibitions of Kurt Schwitters (1962), Marcel Duchamp (1963 – his first comprehensive show in the U.S.), and Joseph Cornell (1966) to the Pasadena Art Museum, where he was director. And MOMA’s Dada, Surrealism, and Their Heritage had traveled to the Los Angeles County Museum of Art in 1968. However, the L.A. art scene of the 60s and 70s was far more removed from the New York art scene, and from
-more-
what was happening in the rest of the country, than it is now and than it has been since the 1980s when it began to play a more prominent national role. Within the scope of L.A. art of this period, those who were concerned with assemblage were a distinct group. Partially due to the dispersed nature of the city, culturally as well as geographically, there were separate networks of artists even among those making assemblages. African American, Asian and Chicano artists were often isolated from the gallery and institutional art scene and may be looked at both as part of distinct artistic communities, and in conjunction with the larger movement. This was also the era of civil rights, the 1965 Watts riots, and general social and cultural change. These events, along with the influential presence of Simon Rodia’s Watts Towers, built from 1921 to 1954 out of scrap metal and found objects, had an important impact on the work of African American artists.

In addition, Tilton Gallery will present for the first time in New York a selection of early body prints by David Hammons. Often considered a New York artist, Hammons created his first major body of work, including these unique body prints, from the late 60s to early 70s while living in Los Angeles. Although his work was often exhibited in Los Angeles, because of the separations among the various art communities, Hammons was seen mostly in the context of African American L.A. artists, and only after his move to New York did he become internationally known for his assembled sculptures and installations. In his body prints, Hammons, by applying oil and pigment to his body and ‘printing’ the forms on paper, created nuanced, ironic and humorous commentaries. As in his sculpture and installations, Hammons was always concerned with making work relevant to the African American experience. This mature body of work has rarely been presented within the art historical context from which it arose. We are pleased to exhibit these works alongside those of his contemporaries working within the assemblage movement in Los Angeles.
The Tilton Gallery is located at Eight East 76 Street, between Madison and Fifth Avenues. Gallery hours are Tuesday through Saturday 10 – 6 and Monday by appointment. For more information, please visit our web site at www.jacktiltongallery.com, or call 212-737-2221.
# # #
Posted by Lori Ellison at 6:06 AM