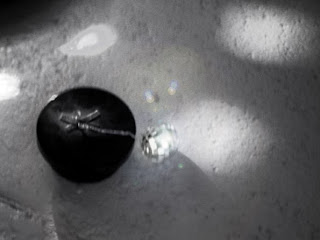 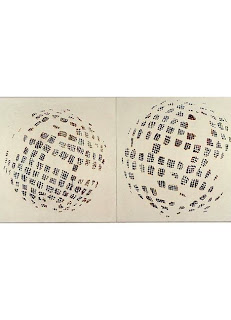 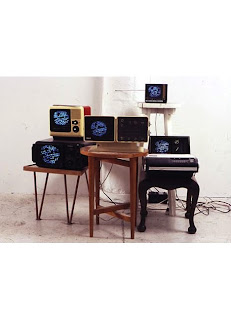 Momenta, an institution of long standing in Williamsburg, and Rochelle Feinstein were an extremely good match. I was truly moved by but it would be hard to describe, the mysterious element, the magic, is elusive to put words to, but I know it tapped into many years of going dancing under mirrored balls which is not frivolous in my memory, many magic moments surrounded and merging with crowds of dancers and waiting to tap into the moment when the music is moving you rather than th effort laden making moves to the music. I will say also it held together remarkably with strong paintings, and installation with painted TVs, and Word Art that held more interest and invention than most. My favorite object entitled Ball and Chain reproduced first at left with a miniature mirrored ball revolving from the gizmo Rochelle created, reminded me of a turntable and black vinyl record. Their is always a piece in very strong shows that I award the purchase prize as the one I would most like to take home, this was the one in this exhibition.

"Rochelle Feinstein focuses on creating beautiful, uncanny paintings that employ light as a medium both literally and metaphorically, connecting subject matter from vastly different realms of experience. Her recent Hotspot paintings present images that reference both reflective mirror balls and globes, commemorating each year of U.S. military engagement in Afghanistan and Iraq. Whether the "Hotspot" signifies a lens flare, WiFi access, a whiteout, a point of intense heat or radiation, or a site of political upheaval, its virtuality is offset by the visual slowness of dutifully hand-made, old-media halftone dots – effectively grounding the technological, social and political in the physicality of paint.

These Hotspot paintings connect to another series; this one painted or printed directly onto mirrored tiles. These works reference Yoko Ono and John Lennon’s "War is Over" anti-Vietnam War campaign, as well as the earlier WWII newspaper headline that Ono and Lennon appropriated. Feinstein adapts this highly politicized historical declaration by adding another subjective layer – turning the phrase into "Love is Over!" and referencing the languages of twelve ex-lovers. She then disempowers her own words’ negativity by physically turning the works on their sides."

Please note my Wilder Shores of Disco i Mix below has some of Yoko Ono's disco and dance music and that she was the original inspiration for the idea as the wildest longest shot in disco music ever. She has had a massive dance floor comeback in the past five years. So disco, a maligned and backlashed form by the later seventies and eighties. It went underground after having become too popular with middle America.

The Politics of Disco

"Disco is a genre of dance music that had its roots in clubs that catered to African American, psychedelic and other communities in New York City and Philadelphia during the late 1960s and early 1970s. While disco was a form of black commercial pop music and a craze among black gay men especially, it did not catch mainstream attention until it was picked up by the predominantly white gay clubs of New York. Latinos and women embraced disco as well, and the music eventually expanded to several other popular groups of the time.

In what is considered a forerunner to disco style clubs, in February 1970, the New York City DJ David Mancuso opened The Loft, a members-only private dance club set in his own home. Most agree that the first disco songs were released in 1973, though some claim Manu Dibango's 1972 Soul Makossa to be the first disco record.[6] The first article about disco was written in September 1973 by Vince Aletti for Rolling Stone Magazine. In 1974 New York City's WPIX-FM premiered the first disco radio show.

Musical influences include funk and soul music. The disco sound has soaring, often reverberated vocals over a steady "four-on-the-floor" beat, an eighth note (quaver) or sixteenth note (semi-quaver) hi-hat pattern with an open hi-hat on the off-beat, and a prominent, syncopated electric bass line sometimes consisting of octaves. Strings, horns, electric pianos, and electric guitars create a lush background sound. Orchestral instruments such as the flute are often used for solo melodies, and unlike in rock, lead guitar is rarely used.

The disco phenomenon was the last mass popular music movement that was driven by the baby boom generation."

VInce Alletti has a new book out with charts month to month of the disco years of the 70s, (specifically 1973-1978) memoirs and photographs, that I have looked through several times at Spoonbill & Sugartown (they are having thier tenth anniversary November 10th, by the way, come celebrate.)


Here is an IMix I published on iTunes, with a title I had come up with for a cassette compilation years ago and was not able to track a great deal down, for the second time or even the first time until iTunes (and I also want to mention Frank Holliday, who I met at Joe Fyfe's dinner after one of his lectures at the Studio School, and we discovered we had both been a lot to Dadio's in Greensboro before leaving
North Carolina) :

Playlist Notes: First three, from Dadio's in Greensboro NC and the DJ who would play funk and the new disco coming out of Europe and NYC equally. The rest:

Get the Funk out Ma Face The Brothers Johnson

Get Off Your A*s and Jam Funkadelic

Get Up Offa That Thing James Brown

Into the Groove(y) Ciccone Youth

Why d'Ya Do It? Marianne Faithfull

Under the Boardwalk Tom Tom Club

You're the One Yoko Ono

Lucretia My Reflection Sisters of Mercy

Try Me, I Know We Can Make It (European Single Version) Donna Summer

Riders In the Sky The Shadows

Ray of Light Madonna
Posted by Lori Ellison at 10:17 AM No comments: