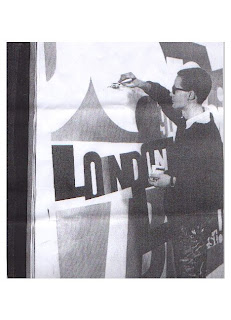 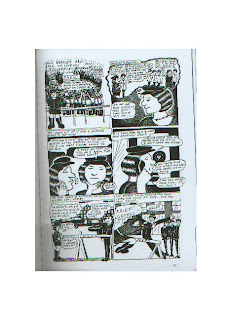 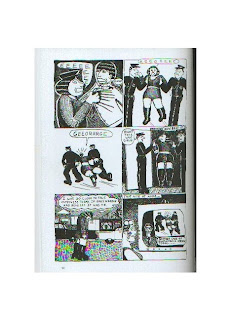 Just what is the connection between Aline Komisky Crumb, the Beatles, Robyn Denny and Hard Edge painting? When last we left hard edge painting , Lawrence Alloway was taking a group of painters determined in that category by Jules Langsner to England. It is very difficult to read Aline Kominsky Crumb's true story comix here, but our teen heroine has set up in the previous page how much of a Beatles fan she was, how she had acquired a Carnaby Street outfit to leave her Beatles paraphernalia and poster filled room and her nearly life sized carving of the foursome on her door, to step out of her Long Island home and go join the mob to await the Beatles' arrival at the Forrest Hills concert - and then she realizes she can call her Uncle Ben, who owned the drugstore at the Idlewood Airport (JFK now), who tells her where they are secretly arriving on National Airlines at a closed terminal - where she goes to fling herself on George, the talented underappreciated one who would need her understanding - where she is actually grabbed by the police but not before seeing rather than the recognition of herself as "the one" she had hoped for from George, fear and loathing on his face - and then sees herself on the news that night being carried away.

Robyn Denny, who was interested in semiotics. signage and hard edge, protominimalist abstraction is painting a mural that all four of the Beatles will be posed in front of for a very famous photograph. Since this series is about the convergence of pop and minimalism and there never has been, and never will be, another pop moment bigger than the Beatles, it can hardly get more convergent than that - but that was the way London was at just the cusp of the sixties, as the next postings will elaborate.
Posted by Lori Ellison at 10:23 AM