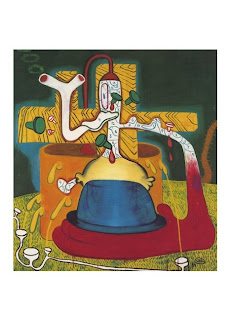 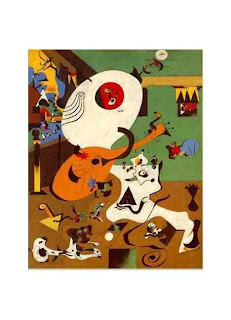 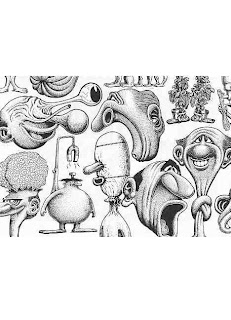 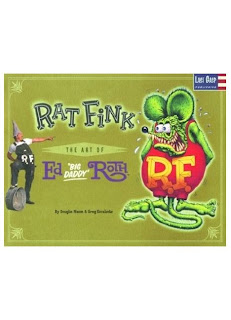 (Please scroll down and then up for the four images.)

The first image is of a Big Daddy Roth book, the second Basil Wolverton and the third a rather famous Miro painting titled Dutch Interior, leading up to two of Peter Saul's early paintings, which I believe I first saw in a catalogue titled Hand Painted Pop years ago. (I had been familiar with his later work since first going to art school.)

If Peter Saul showed his earlier paintings at a slide talk he gave in the mid eighties I attended while living in Austin I don't remember it - what I do remember clearly was his first two slides. One was ratfink in all his glory with his hands on the stick shift of one of his bronco like hot rods, and one of a comics style grotesque head. He cited Big Daddy Roth and Basil Wolverton as influences on his work which not only made a lot of immediate sense to me but tapped into my forgotten enthusiasms for both.

I spent so much time as a child at various magazine and comics stands marvelling in all kinds of stuff but especially remember CARtoons magazine and reprints of the older, really seditious re-editions of MAD with Basil Wolverton. (Basil Wolverton may still be at Barbara Gladstone as I am posting this.) I leave it to everyone to see and explore the connection at their own inclination or discretion - the Miro reference is more standardly art historical, and immediately familiar.

However, Peter Saul is not a pioneering pop artist for nothing, and I would say one who mined subcultures of popular taste from the beginning, along with the domestic interiors, and more and more as time went on. He has obviously thought about the way the fifties censored comic books in the same way that other artist thought about the way the Hays Code effected filmmaking. This is where artists like Peter Saul, Ray Johnson, Oyvind Fahlstrom and Andy Warhol intersect with the interesting ways one can love popular culture and respond to and create the new underground at the same time - and the British Pop movement had the same underpinnings as I wrote earlier in my essay on the interplay between Pop and hard edged painting. That Peter Saul's work is related to pre code comics rather than the kind of cool and ironic but also suspiciously sentimental nostalgic beginnings of Lichtenstein's presentational appropriations of comics has made Saul's work always more tapped in to the sheer joy of draftsmanship and paint and materials and much more amoral and engaged, in the political sense, and therefore engaging, for this viewer. ( I once overheard Peter Saul and Joe Zucker talking shop talk about what kind of paint they use at Zucker's opening, which was delightful.)

I went to the retrospective in Philadelphia to see the earlier paintings and really get a good look at them, although the late work is riveting in a certain fashion it certainly has been around a long time and it is a fact that early work can be shown for the first time to younger artists and have more to say as feeling to them fresh, and other qualities not easy for others to see. I could draw a comparison to some younger coworkers I had at Saint Mark's Bookstore discussing how good early Tom Waits records are - I had written a review of Swordfishtrombones when it first came out in the early eighties as an enormous breakthrough from a very good songwriter who had gotten to be someone one could buy every other album from, so it was difficult to hear this from my own standpoint - but I had an immediate kind of double vision right then about how good the early work could sound to these younger listeners so many junkyard/Beefheart/Kurt Weill influenced Waits albums later. He was always such a good songwriter, and it transcended his persona back then and stands now. So I want to say this as a fan of Saul's who has lost the thread with the signature work over time that I had gone down to see how good the early work really is. And how important it could be to younger artists - or anyone really - who has not discovered it or had the chance to experience it.

It is a testament to how really novel it was in his time to go to Paris and study painting of all kinds and come up with this unheralded subject matter of American iceboxes, stuffed chairs, stretched out superheroes and the like, and I would love to write more about this at some point - especially from the jumping off point of a phrase I heard living in Paris that translates as "homesickness (mal du pays) is missing the food one grew up with." (Peter Saul wqs born in 1932, the same year as my father, and grew up with what continued to be called iceboxes, not "refrigerators" - even when they had become newly run by electricity.) I am adding Miro's Dutch Interior because this is a reinterpretation of Miro's from dutch interiors, making a thread from the Dutch Interiors from the 17th Century to Miro's influence on Saul so that he could come up with the Pop surrealist domestic paintings he invented. By way of Big Daddy Roth and Basil Wolverton and a host of other comics artists.

This is to pay homage to three other inventive artists just underneath: Big Daddy Roth (not just a cartoonist but one of the icons of hot rod creation and the culture that went with it:, Basil Wolverton and the whole creation of Mad Magazine and the culture that went along with the comics and humor it pioneered and was never surpassed in; and also of course Miro whose recent show at Moma was a revelation for so many.

(Peter Saul is not the only one who was influenced by Miro by any means. Raphael Rubinstein's recent article in Art in America about what he terms the provisional has a meditation on what he saw in the most radical of the rooms in the exhibition, and it is worth reading - I also saw Robert Ryman, and something of Twombly, and so much of the future of painting in that room, in that direction. Gorky and Peter Saul just to name two took others.)

Before I get too far involved with Miro I would like to bring back the subject to Peter Saul, who has always been around and had cult figure status - much like the extra-fine art sources he loves to look at and derive from. The blog before this one - through a very lengthy path through a discussion of a social concern of everyone in the nation - has put him in the realm of the amoral, but in such an in one's face and satirical way that one feels he must be delighted with the love him or hate him divisiveness he sets up; nevertheless he is poised for a major reconsideration in the grander scheme of things. Certainly with an entire late nineties show entitled Pop Surrealism he should be talked about more by the painters and sculptors not to mention the writers and curators themselves. I am reminded of the difference sometimes between the art world and the music world, where Michael Hurley was interviewed recently on NPR about participating in all kinds of folk concerts and festivals with the burgeoning "Freak Folk" scene created by young people - he said "they need their grandfather."
Posted by Lori Ellison at 7:18 AM No comments: