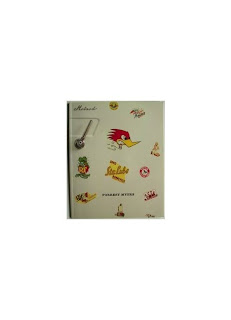 Most famously known for his bright blue wall on the border of Soho with aqua girders that has with much press coverage and fanfare been reconstructed and permanently installed back where it belongs, Forrest Meyers has been around and continued to make an ongoing series of bodies of work in all kinds of categories, the ad hoc spirit being the one I chose two pieces from in visiting his studio and apartment right in my neighborhood. I don't have images of the pieces yet to upload here. The cover of his catalogue to a show from Art et Industrie and some excepts from the review in Art in America following the exhibition in the mid nineties will have to suffice for now:


There is nothing new about the effort to meld art and function, In our century, it was an important mission of such modernist movements as De Stijl, the Bauhaus and Russian Constructivism. What Forrest Myers brings to the genre is a cheeky irreverence that places more emphasis on the furniture-ness of art than on the art-ness of furniture. Thus, while some of the art-furniture sculptures exhibited here remain marginally usable, for most the spirit of functionality seems introduced so as to disable the art-for-art's sake mentality of more serious modern and contemporary artists.

Picnic Table is an excellent illustration of this process. Installed so that the viewer entering the gallery gets a full frontal view of this work, it resembles at first glance a three-dimensional Sean Scully. Alternating upright planks of rusted and polished steel suggest a dialogue between light reflected and absorbed, between rough and smooth, between warm and cold. Only when one walks around the piece does it become clear that it is actually a full-sized, functional picnic table set on end, a realization which immediately deflates such high-flown formal responses.

Other works make sly reference to other modern and contemporary masters. Smokin' offers a red, buckled car hood (a la John Chamberlain) equipped with a flickering fake fireplace. Something Like a Good Armchair takes Matisse's chestnut and realizes it by shaping an overstuffed chair out of steel bedsprings. Mesa Double makes a nod to David Smith with a pair of polished steel plates affixed to an undulating black steel pipe in such a way that they could serve as seats. Such works tweak art history while hinting that the exalted status of high art is only a convention deriving from its apparent distance from function.

Other works relate to popular culture. Toon is a bright orange armchair fashioned out of a tangle of coated aluminum wire which indeed suggests a cartoon doodle brought to life. Ornette, a testament to the artist's lifelong interest in jazz, is a wire bed frame outfitted with pink plastic bottle caps and hung against the wall in such a way that its shadow suggests musical notation.

Myers has been interested in the intersection of art and technology since the 1960s, when he was a member of E.A.T. (Experiments in Art and Technology). While many of his fellow artists went awry because they invested too heavily in a utopian vision of technology, Myers has continued to infuse his productions with a strong sense of whimsy. They refuse to allow us to take any polemic seriously.
Posted by Lori Ellison at 8:05 AM