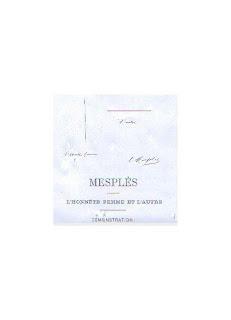 The image is barely visible but it is a vertical line with "the honest woman" handwritten in French below it and a horizontal line with "the other" handwritten below it. The lines are from typographical blocks and the pun is spelled out typographically below in addition , and further puns on vertical and horizontal lines are demonstrated below based on the stiffly upright drunk and the passed out one, colloquially untranslateable.

From the Introduction to Jacques Derrida' book Aporias:

The Greek word aporia, which I chose a long time ago as a title for this occasion, without really knowing where I was going, except that I knew what was going to be at stake in this word was the "not knowing where to go." It had to be a matter of the nonpassage, or rather from the experience of the nonpassage, the experience of what happens [se passe] and is fascinating in this nonpassage, paralyzing us in this separation in a way that is not necessarily negative: before a door, a threshold, a border, a line, or simply the edge or the approach of the other as such.

This is so beautifully the theme of this show and the reason I titled it Pop Aporia, before I had even found this quote, that I felt a moment of kinship with the author as I read it; and as the theme of the Other runs through the hard edges here, it is lovely to return it to France, in both our century and the one preceding it. The discussion of Situationism and pop culture does bear reminding that in 1968 the French Situationists used comic book art to subversive effect along with other pranks and revolutionary tactics.

This simple, most minimal, typographical pun with its caption "the Honest Woman, and the Other" comes from another eighties, the 1880s in Paris, 1884 to be exact. It is from a book The Spirit of Montmartre: Cabarets, Humor and the Avant Garde, 1875 - 1905, and this book is one of the reasons I titled this forum Cabinet of Cabarets, as all of the roadmap for dada, futurism and neo-dada was put into place by the Hydropathes, Fumistes and Incoherentes and the publications, graphics, performances and salons the poets, musicians and artists were organizing at a time of another life during wartime: the defeat of the French army at the Sedan by the Prussians in September 1870 ended the imperial reign of Napoleon III, and ushered in the leaders of the newly formed Third Republic who were responsible for the brutal destruction of the French Commune the following spring. the humiliation of France by the then very new nation state of Germany and what many considered genocide by the new government led to a very deep seated questioning of notions of patriotism and nationality. without much political access or power, the subversive humor, irony and pranks took the forefront along with the most inexpensive of drinks, the bon bock, a tribute to the lost region of the Alsace Lorraine.

I did say earlier I also saw the roots of this humor in perspectives gained through science, and saving Jarry and pataphysics for later, I will say my favorite visual pun of the last fifteen years comes from the scientist who solved permanently the debate in the real ongoing physics community between particles versus waves by stating that particles that are round when seen from the side are rippling discs, at least in his own mind - reminding me of Jarry's reminder that people shouldn't call a pocketwatch round when from another view it is long and oblong like a wand. It is all a perspectival twist, and when Einstein said he didn't believe God played dice with the Universe, perhaps She plays rippling tiddlywinks: what a pleasant game that conjures up.
Posted by Lori Ellison at 6:56 AM