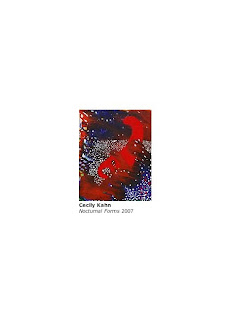 With apologies to the size of Cecily Kahn's image. This is my promised return to Sideshow, with an emphasis on three painters that are in the current show who are members of a group that is not official but just an affectionate taxonomy of my own, Daughters of American Painters. I do say affectionate because I have met them all through working at Sideshow, and I can not imagine three less diva like women engaged 100% with painting themselves and as unflaggingly engaging with the art world when they are in it. Lauren Olitski and Jim Walsh had a show at Sideshow and I went there today to see if I could find the catalogue. Mara had two paintings in a fairly recent show at Janet Kurnatowski, and Cecily Kahn, who is the daughter of two painters but in addition her grandmother Alice Trumbull Mason was one of the founding members of the American Abstract Artists Association, of which Richard Timperio impresario of Sideshow himself is a member, and not to long after I had started working there Thornton Willis and James Little had a breakout show entitled Raising the Bar. The connections and cross connections between Sideshow and the AAAA are numerous. The Quadruple As are one Cabaret of Characters I will try to share the history of, in my taxonomy of social groups and connections between artists, poets and performers in all mediums, as one of the earliest groups of its kind and miraculously still outstanding (you may use that term in both senses of the word), a testament to the longevity of its members and of its shared passion.

Please don't forget to scroll down for the posts of Mara Held and Lauren Olitski.
Posted by Lori Ellison at 12:43 PM