The Spirit of Montmartre 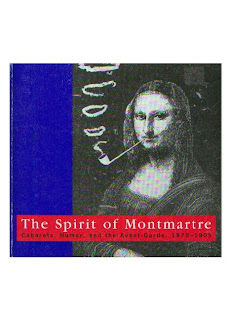 Sometime in the last two years I was sitting in the Studio School's lecture hall listening to Arthur Danto give a magisterial talk about going to the Whitney to see Manet and Brice Marden as the beginning and end of modernism, having already found this book in researching Pop Aporia and 18th and 19th century perspectival (visual and imagistic) humor.

Here is the opening paragraph from one of the first art historian's essays in The Spirit of Montmartre: Cabarets, Humor, and the Avant-Garde, 1875 - 1905, by Phillip Dennis Cate:

"On Sunday afternoon, 1st October 1882, the artists Edouard Manet, Pierre-August Renoir, Camille Pisarro, and Louise Abbema, the composer Richard Wagner, and the king of Bavaria were among two thousand curious invitees reported to have crowded into the small, Left Bank apartment of the young writer Jules Levy, to view the exhibition bizarrely entitled Arts Incoherents. The young journalist and writer Felicien Champsaur chronicled this unusual event:

' If you didn't see it, you haven't seen anything. It was extraordinary. Ferdinandus enjoyed enormous success with a painting in relief, Le Facteur Rural [the Rural Postman]. It really was a painting in relief, because the mailman's shoe, a real shoe that had been visibly worn, vigorously thrust back, protruded from the canvas...Miss Chabot, a dancer at the Opera, told me she had exhibited a landscape on the sole of her ballet slipper. It's so small I didn't see it.'

Levy's first idea was to have an exhibition of people who don't know how to draw, (...) and to have it in his bedroom, which 'also serves as my living room, dining room, kitchen and bathroom.' In fact he had organized such a show, but not at his home, on 2 August of that same year as a charity benefit for victims of a gas-main explosion. by October this proto-'happening' included work by artists and nonartists alike and had acquired the name Incoherent."


Just as Danto was beginning with his discussion of maet and the art historical version of painting as a window leading up through and to Brice marden until I was feeling his monochromes squashed up against this purported window by the way Danto was recapping the usual recieved history, I was also aware that Manet had seen the first exhibited monochrome at this salon, in 1882, Paul Bihaud's black print monochrome entitled Combat des Negres dans Une Cave, Pendant La Nuit. Marx had famously said that history repeats itself as farce, but in the topsy turvy world of Rabelais, Cervantes, Tristam Shandy and above all the Fumistes, Incoherents and Hydropathes, composers, musicians, puppet and shadow players, playwrights, prose stylists, poets,spoken word performers, graphic and visual artists of all kinds centered around the Chat Noir Cabaret, it was novelty and farce that opened the door for the serious art history to follow - or the many subversive humorous cabarets of the 20th century, that continued to inspire all the purportedly "serious" artists - all schools not housed in institutions are more fluid with the intersection of the arts.


The intervention of the Mona Lisa smoking a pipe - and joining les fumistes (the smokers) is by Eugene Bataille also known as Sapeck for publication in Le Rire. Duchamp had great success taking a tradition that had been in place in Paris since the 1870s the bourgeois had joyously been flocking to for little thrills and shocks rather harmless compared to the catastrophic wars, sensational murders especially ones perpetrated by servants on their own class, anarchist bombings and other truly fearful things the newly trying to understand its own fledgling power, in a France surrounded by monarchies with truly burgeoning war engines, and trying to build a colonial empire competitive with the United Kingdom anyway. Duchamp had the good fortune to arrive in a naive New York unconditioned to the forty year tradition gathering force, culminating in Alfred Jarry, and continuing on from there, and to find a group here for New York Dada to mine it to the best effect ever, as new Yorkers were trying to learn a great deal about European culture in the most studious and serious manner.
Posted by Lori Ellison at 6:08 AM