New Orleans and the Jazz Cadence of American Culture 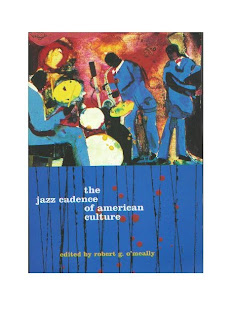 Yesterday I saw this book in Spoonbill & Sugartown for some ideas about the country and the city and the way things migrate both ways, and certainly The Great Migration has been much on my mind for a group of artists who will be in the show Ad Hoc Shop (interestingly since the role of the suburbs and pop was discussed in Pop Aporia.) The first essay "Jazz - the Word" by Alan P. Merriam and Fradley H. Garner actually gave me an interesting way to frame the show itself as a group conversation and an excuse to post something about New Orleans and Project.1 while all the articles and coverage are still appearing. After pages of the earliest found journals in the second decade of the century all circulate a suspiciously similar version of some unlikely origin in a name like Jasbo, or Jas for a James Brown (!) who played more wildly and barbarically on the picollo the more gin or other kind of drink he had to calls of jas jas from the audience, and then more scholarly attempts to find it in African and Arab language were not confirmed too well by the speakers of these langauges themselves, I found this paragraph which the scholars found the most likely source, although they say at the end the word came into wide usage between 1913 and 1915 and the philological and the linguistic origin may never be found. Here is the important points translated from the French, from Schwenke in 1926:

The word jazz is of French origin, and its application to music is the faithful reflection of its literal meaning. Two hundred years ago, French civilization had taken a firm hold in the provinces (later the States) of Louisiana and South Carolina. for sometime French was the dominant language in the cultivated cities of the South (New Orleans and Charleston)...in French literature, jaser is often used to describe a conversation that touches on a variety of subjects, with everyone speaking together.

I had concieved of group shows as a dialogue with each other, and musically jazz - which has solos, entertwining musical threads, back and forths and all kinds of ways of making the instruments "talk," and yet a friend of mine who has played in many kinds of bands said that being in a jazz ensemble is like being in a competitive sport. There is that in the arts, competition within ensembles. Project.1 has also brought up a lot with one international heavyweight city, New York bringing a new Biennial to New Orleans, pretty much the origin of jazz music which spread quickly to all other cities where the expensive instruments of European orchestras could be obtained or less expensive versions could fill the smaller town jook joints. Here is a very short letter from a native of Louisiana on his take on Project.1, which has an incident very like the one Hrag Vartanian describes in his article from the Rail, so alike he may have been one of the writers mentioned. Since even Glenn Ligon's very good article in Artforum was written by a New Yorker who went down there, I wanted several short letters from folks who actually live there; Here is one very succinct one pending another couple of friends who will then also be included here (the writer wishes to remain anonymous):


"Basically my take on it was that there were two tiers of activity. There was this New York hit parade dance to its own beat and then there was a narrow wedge of New Orleans flavored stuff meant to appeal to an international audience's taste for Cajun flavored Katrina Gumbo. I think Amy Sillman, Tomasselli, and T.D. Hancock are probably all nifty enough painters, but what does their work have to do with this other heavy handed parade and jazz funeral influenced selection of local art?

I went to one new artists' studio/lecture/workshop/gallery space funded by the Joan Mitchell foundation. I walk up with three art tourist/art mag writers and the place is not open. We wait. It doesn't open. Eventually I call and someone sends for a janitor to open the building. We go inside and find a smattering of art in unlit galleries. One of the people I've entered with turns to me and says "They must be trying to make things happen. You know to re-invigorate the city." He has decided to sympathize with the loser locals and has lowered his expectations sufficiently to tolerate this bullshit poorly run artspace and the lame offerings on display, because the people are trying.

Meanwhile, I can think of quite a few great artists that live and work within spitting distance of that place and these folks will never know that, because the P.1 is designed to make the city look pathetic."

Update later in February, a short note from another friend:

I have to admit I did not see a lot of Project 1 in person; it was spread out quite a bit so I was pretty selective; I did read a lot of reviews, saw a lot of phots; for me, that was enough. A major complaint voiced by many locals was that the emphasis on international as opposed to local artists was unfortunate. There was one guy whose actual conceptual piece was to visit New Orleans, partake of the culture and various amenities and be funded for it. Sounds like a republican to me. Also a number of folks whose work struggled to comment on the tired katrina theme even though they were from not just out of state but country. All the same, it brought some folks into the city, brought more attention to art and sparked a lot of commentary. A bit more discretion and it would have been better, but hey, if it brings you guys back to town, it's a good thing."


I would like to end this by an anecdote from one of my lunches at Kasia's, the Polish restaurant in Williamsburg I probably have gone to between two and four times a week since moving here, when I met a young woman who was up from New Orleans to meet with the Fashion Industry, that has also rallied for New Orleans with a Fashion Week either yearly or every two years, and she was particularly trying to tell the New Yorkers that they had to leave their notions of efficiency, businesslike, brisk and fast talking style behind once they go down to New Orleans, that is not the way anyone does business down there. Actually my family comes from East Texas not too far from Louisiana, and a very small town; and even though I grew up in the suburbs of DC, I lived in Richmond for ten years and Austin Texas for two years - and then Paris for five years where the tradition of jaser, causer, bavarder and discuter are still so very much in place - and I often feel out of synch with the talk style here. Especially when it reminds me of another style of talking conjured up by the French verb disputer.

By the way my iMix entitled Louisiana can be found on iTunes here, along with 36 others I used to make before going full steam ahead with this blog:
http://itunes.apple.com/WebObjects/MZStore.woa/wa/viewIMix?id=261862808
Posted by Lori Ellison at 7:51 AM