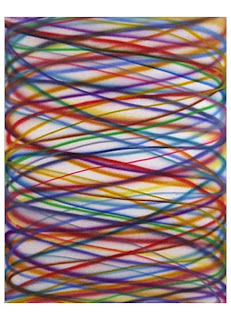 I just spoke with Ronnie Landfield as only my second blog posting in this brand new endeavor had promised a memorial to Dan Christensen and Michael Goldberg. The last series was Mara Held, Cecily Kahn and Lauren Olitski with just a short homage to their place in the New York painting culture and art world and art history expanding outward form that; I had intended to introduce the first part of Dan Christensen through this association: the first words Ronnie Landfield spoke, in his shock and his grief to stand up and share his eulogy at Spanierman's memorial to Dan on February 13th, was "It is said that bad things come in threes, and Larry Zox died on December 16th, Dan Christensen on January 20th, and now we've just learned that Jules Olitski died on February 4th."

Following is Stephen Westfall's essay from the small catalogue accompaying the Spanierman retrospective - Dan was present and warmly and lovingly surroundedly so at his entire opening there and passed away the very day after; surely this is a parable for painters and artists and writers and performers of all kinds of some meaning and depth. I hope everyone will take the time to read this essay as the catalogue is no longer available unless Spanierman does print it again as they were intending, and would also like to direct anyone to Karen Wilkin's article in Art in America. Ronnie is working on a piece for publication on Dan and you can be sure I will keep everyone posted. (Is this a lay on words since blogs are posted? I hope so...words are one of the things I play with)

Stephen Westfall
Posted by Lori Ellison at 8:11 AM