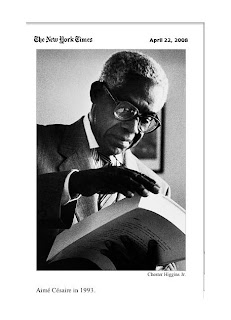 Martinican poet, playwright, and politician, one of the most influential authors from the French-speaking Caribbean. Aimé Césaire formulated with Léopold Senghor and Léon Gontian Damas the concept and movement of négritude, defined as "affirmation that one is black and proud of it". Césaire's thoughts about restoring the cultural identity of black Africans were first fully expressed in Cahier d'un retour au pays natal (Return to My Native Land), a mixture of poetry and poetic prose. The work celebrated the ancestral homelands of Africa and the Caribbean. It was completed in 1939 but not published in full form until 1947.
my negritude is not a stone
nor a deafness flung against the clamor of the day
my negritude is not a white speck of dead water
on the dead eye of the earth
my negritude is neither tower nor cathedral
it plunges into the red flesh of the soil
it plunges into the blaxing flesh of the sky
my negritude riddles with holes
the dense affliction of its worthy patience.

Aimé Césaire was born in Basse-Pointe, Martinique, in the French Caribbean. His father, Fernand Elphège, was educated as teacher, but later worked as a manager of a sugar estate. Eléonore, Césaire's mother, was a seamstress. In Cahier Césaire described his childhood in a harsh light: "And the bed of planks from which my race has risen, all my race from this bed of planks on its feet of kerosene cases, as if the old bed had elephantiasis, covered with a goat skin, and its dried banana leaves and its rags, the ghost of a mattress that is my grandmother's bed (above the bed in a pot full of oil a candle-end whose flame looks like a fat turnip, and on the side of the pot, in letters of gold: MERCI)." Césaire's family was poor, but his parents invested in the education of their children. To faciliate the studies of their talented son, they moved Basse Pointe to Fort-de-France, the capital. Among Césaire's classmate at the Lycee Schoelcher in Fort-de-France was Léon Damas, who later contributed to négritude.

During his years in Paris Césaire met other Caribbean, West African, and African American students, but the most important acquaintance was Léopold Senghor, a poet and later the first president of independent Senegal. Senghor's Anthologie de la nouvelle poésie nègre et malgache (1948) became an important landmark of modern black writing in French.

The photograph is from the New York Times obituary honoring Cesaire when he died in April at 94 only last year.
Posted by Lori Ellison at 6:49 AM