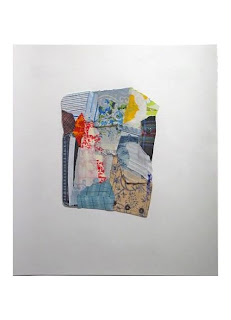 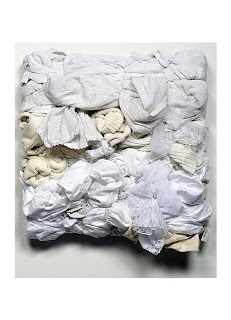 Excerpts from an article in the Washington Post by Blake Gopnik on Shinique Smith:

Shinique Smith is as fine a mixture of street and salon as any artist could be.

For decades, her family lived in the genteel Baltimore neighborhood of Edmondson Village. Except that by the time Smith was growing up, she says, that gentility was lost and by now it's "totally the 'hood."

She was born to a teenage single mom who left Shinique (rhymes with "Clinique") behind to be brought up by her grandmother. This young mother, however, had "abandoned" her daughter to study fashion in New York and Paris, then came back to push culture and education on her kid.

Smith went to storied public schools in Baltimore: The Baltimore School of the Arts and later Frederick Douglass High. In between those two schools, she got arrested, for what she calls "ridiculous" graffiti crimes, and was bounced to Southwestern High, where metal detectors were de rigueur.

All along, this has been what Smith has had to reckon with: A complex negotiation between the "high" culture of the art world, for so long steeped in whiteness, and the black "street" culture of the city she grew up in.

Smith is proud of her brief flirtation with graffiti as a member of TWC, The Welfare Crew. "For a minute, I was the only girl writer in Baltimore," she says. But press her for details about her teenage arrest, and she just laughs it off as youthful foolishness, long since scrubbed from her record. That was more than 20 years ago, she points out. Her street-art past may be something "people like to glom onto," but she has spent decades moving on from it.

(In the show in DC covered in the Post, Smith included new verses from Nikki Giovanni, as part of the sound collage mix. Giovanni is in her sixties - there were students at the high school I went to in Columbia Maryland who wanted Nikki Giovanni at our 1976 commencement, but as the second only graduating class of Oakland Mills High School, we didn't have the budget. We were excited about reading her poetry then, the very young high school women.) Giovanni's verses include such phrases as "You are Just / If there is any / Justice / Trying to find a way of not / Just surviving but living" and "You are just / trying to say 'I'm Alive.' " They inspired Smith to include the following in her assemblage, which cascades from one corner of the room: A torn Tupac Shakur T-shirt, collaged photos of dead hip-hoppers such as Aaliyah, Jam Master Jay and Lisa "Left Eye" Lopes (along with similar homages to dead fine artists Jean-Michel Basquiat and Keith Harding), images of roses torn from a movie poster for "Youth Without Youth," a cardboard-cutout butterfly, a plastic "Heavyweight Wrestling" trophy belt, gold plastic beading hanging from the ceiling, swirls of illegible writing done right on the wall (in that sumi ink), lengths of red ribbon, blue shoelace and yellow caution tape stretched across a window embrasure as well as a pair of high-heel pink mules that sit demurely in the middle of the mess.
Posted by Lori Ellison at 4:43 AM