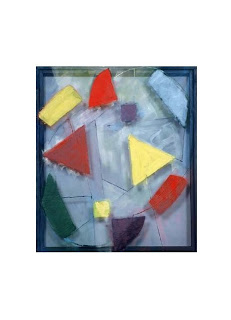 The paintings to the left are, from top to bottom,,

Joe Overstreet is the impetus behind the Ad Hoc show idea - and certaInly someone knowledgeable enough for me to have learned from; he of course has lived the postings on Jazz cadence, Hilla Rebay and the Museum of Objective Art, and also Harry Smith with his "Injuneering" (early teenage recordings of Pacific Northwest potlatches) and rural roots recordings, and celestial and Pythagorean interrelationships. would be all very familiar to him from his own studies and experiences.
I had visited his studio just following the opening of High Times Hard Times hoping to put a show together of what some of the same artists were doing currently, a temporal bookend if you will, and include someartists who had not been in especially Gerald Jackson and Thornton Willis, and Ronnie Landfield who I met just a little later. The show fell through, but the first thing I told Joe and Corinne was that I was born in Montgomery Alabama, but that it was on an air force base, but looking at the screens built on to the stainless steel structures reminded me of going to family back in Crockett, Texas or Charlottesville, Virginia in the warm to hot months and looking through the screen door or porch at the birds or squirrels and trees and landscape outside. The idea of Ad Hoc, painting and assembling, and just plain assembling work, came out of my wanting to do a show with Joe Overstreet as one of the guiding spirits. This is from his website and says it all much better than I could. Also several summers ago there was an exemplary show at Zwirner titled "a point in space is a place for an argument." It was such a good show where all the work could have a dialogue in the tradition of the French verb "jaser" and Joe's piece was a nice extended solo interweaving with work by artists Lynda Benglis, Forrest Bess, Alfred Jensen, Lee Lozano, Niki de Saint Phalle, Katy Schimert, Al Taylor and others. Here is some of the accompanying text to Meridian Fields:

In the mid 1970s I understood my reality by looking into the deep. Where it was clear and not murky, from the surface 30 or 40 feet above, I could view the ocean floor.

In effect, this reminded me of looking out from the screened door of my grandparent's porch as a child, out at the fields near Meridian in 1940.

The screen paintings have a strong structural base, and incorporate geometric shapes such as whirling squares, logarithmic spirals, and patterns of organic growth, along with rhythmic waves found in music.

In the mid 1970s I made more than 100 screen paintings, but at the same time I was enjoying painting on canvas, and I continued to be occupied with that into the 1980s and 1990s.

At one point I realized that the canvases and structures I was working on were nothing more than surfaces. The way I work now the shadow is a part of the structure and as such, very much a part of the painting itself.

Open spaces, celestial observations, and the suggestion of the rhythms of nature reflect the rural, northeastern territory once ruled, and still inhabited by Mississippi Band of the Choctaws.

"Overstreet's oeuvre has remained dedicated not exactly to the idea of a black esthetic but to African-American art history, and at the same to the broader stream of Western modernism and post-modernism of which it is a part.

Overstreet is an artist in the American tradition. . . His work demonstrates a courageous determination to somehow be true to both."
Posted by Lori Ellison at 4:57 AM