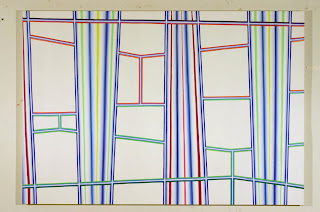 I went to Jennifer Riley's studio and chose the painting that looked like a bridge and she said it was indeed based on a bridge, and the other painting is and isn't a room and an architectural space. this site itself is currently under construction between Jennifer and myself, will be further illuminated soon.

Hi Lori, I remember that day in my studio when we spoke about your idea for this show. The paintings were made a few years back now in 2005, maybe early 2006. I was looking out my studio window on Jay Street at the trusses of the Manhattan bridge and feeling the whole space vibrate when the train went by and I thought about how Mondrian was perhaps similarly effected by the jazz and visual commotion of Broadway when he moved to this city, a place so far from his roots, far from the time and place, Communist Russia. I imagined, it must have felt to him like landing on mars. I had just seen the terrific Malevich retrospective at the National Museum in Rome that June in which they showed a documentary of the 1980 re-enactment of “Victory Over The Sun”, the Cubo –Futurist Opera for which Malevich designed the set. This was directed by Robert Benedetti and acted by students from the California Institute of the Arts (I think I got that right). My work was line driven at the time –still is to a fair extent but- from these paintings, I later discovered a way to organize shapes of flat color. I was working on formal problems, interested in composing with multiple types of space. In ‘M, M, M’, there are three perspectives, atmospheric, aerial and frontal as in seeing an elevation either in the world or in a drawing. In my painting, “ Victory over the Sun, for M.” I was trying to inscribe a space that included the position of the viewer as well as to convey flatly organized lateral and vertical movement. Many people referred to this as ‘oppy’ work because of the vibrating color or they thought I used florescent color to make it glow. Actually it was just old fashioned pigments of the ‘normal’ spectrum, not the extended ones that ‘fluoresce’ but they are painted in simple freehand adjacent strokes, diluting the color with each stroke until it dissolves into the ground color, which is bright white.

This is a letter from Jennifer, and as I have a letter or two from New Orleans and hopefully sources coming up (this is an open invitation and all call), I am printing as is.
Posted by Lori Ellison at 1:22 PM