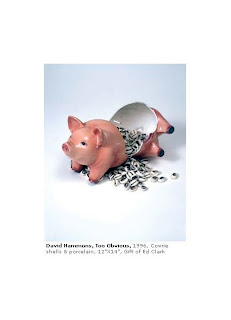 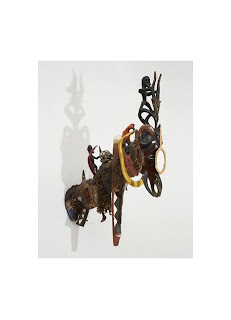 Here I would like to recognize Katharine Gates on my forum as the artist and Gallery Director of Key Gallery in Richmond Virginia in the early nineties, one of the first new people I met in Richmond after moving back there from Paris. She organized a show for Key with Hans Haacke's sculpture dealing with Phillip Morris, which he was quite happy to show just down from where the Tobacco Festival had its yearly celebration in Shockoe Slip, along with work by Paper Tiger, Dyke Action Force, and notably David Hammons' Whose Ice is Colder. There was a panel discussion with some local art historians and instructors notaly centering on the large mural David Hammons did of Jesse Jackson in pinkface, with blond hair that was quite memorable - especially for Richmond, former capitol of the confederacy.

Later when I was in graduate school at Tyler Stan Whitney arranged for the full graduate student class to come up to New York and get a walking tour of Harlem with David Hammons. In the Richmond Public Library back visiting from graduate school I found a book on David Hammons where he wrote about Aime Cesaire and the way things are made and constructed by the folks in Harlem, this is why I posted the Adhocism book, Aime Cesaire and David Hammons today as the one major lineage of the show Ad Hoc Shop.

The broken Piggy Bank with the cowrie shells is more timely than ever.
Posted by Lori Ellison at 7:11 AM