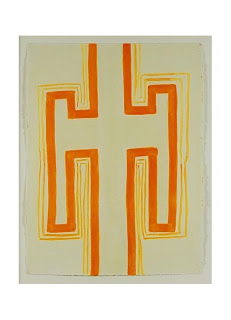 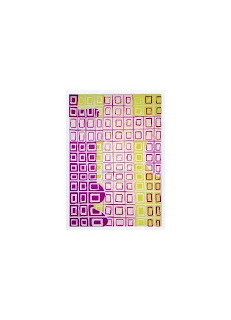 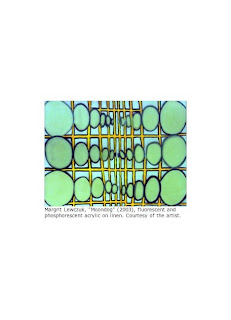 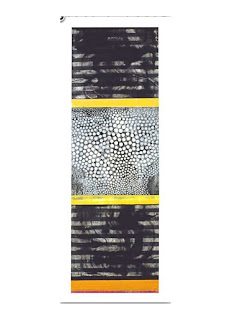 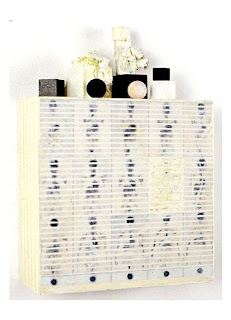 This is first of all a reminder that next weekend is the last weekend to see It's A Wonderful Life at Sideshow. I no longer work there however it is around the corner from where I live, and Saturday when I went in there I saw Stephanie Frank, who showed me where her two paintings were in the 300 plus salon style two rooms, hers are on the wall facing one as you come in the door, near the bathroom door, looking up. Also on Saturday I encountered Jenny Landfield talking to Jeanne thomsen, who is currently in a group show at Nurture Art, a nonprofit space in Williamsburg open to curatorial projects of all kinds. I had wanted to revisit a certain familial notion at Rich's group show that expands on and goes beyond the community / communal feeling of the big group show, after writing about the daughters of American painters earlier in the blog, and Jenny was able to show me her mother Lenore Jaffe's collage work hung just to the left and above of Ronnie Landfield's painting and their son Noah Landfield's which I had seen as part of a series of wildly colorful volcano paintings, however the nicest surprise was Noah's wife Nagha Wada, a large rhythm of tiny petals coming down on a white field which was next to my small drawing and Gelah Penn's small framed sculpture in thin plastic filaments, we remarked on how well rich had hung the three together. (Gelah is one of the many couples included in the show; her husband Stephen Maine has a painting in the first room.) Rich has his daughter Cheyenne and son willy included in the show and is quite glad to point them out, and another important visitor to the gallery that day the filmmaker and chronicler of artists for PBS and other venues was showing rich on the PC his DVD of Nicholas Carone - who has a haunting as can be painting in the show and Claude Carone his son has a painting worth seeking out over the door to the hallway.

Sunday I was sitting chatting when my friend Leslie Roberts, who is a favorite fellow notebook artist of mine, came in to see work by friends and said how sad it was that Mary Hambleton had died, either two days or the day before the opening. I had not known this at all, having been in Los Angeles for another opening that night. So I am posting two artworks from the Mary Hambleton website which I hope everyone will visit. She had cancer for six years and yet never stopped working. This was a bit of a shock so I am afraid I may do Mary Hambleton more justice later. The two reproductions are from bottom Topsey Turvey 2006 and next upwards, Tall Dots with Orange Stripes 2006.

The next three reproductions are by Margrit Lewzcuk, who had a painting in an exhibition entitled The Color Imperative at N3 Space on North 3rd, that I thought for a second might have been by Chris Martin but more interesting in a certain way, before I read her name on the exhibition checklist. Then I saw her small exhibition at the Bowery Poetry Club while there for a reading, and the reproduction at left with the squares entitled Fire Fly was a large painting I was so happy to look at while gallery sitting for the Shapeshifters group exhibition at Sideshow. I am very excited by this work and in the stages where I haven't begun to form anything to write or frame it with - a very enthusiastic stage for me and one I am actually inclined to prolong at the moment.