Larry Zox and the Hard Edge 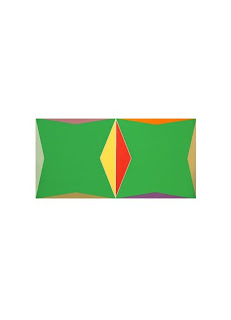 Hard-edge painting is painting in which abrupt transitions are found between color areas. Color areas are often of one unvarying color. Color transitions often take place along straight lines, though curvilinear edges of color areas are also common. The Hard-edge painting style is related to Geometric abstraction, Op Art, Post-painterly Abstraction, and Color Field painting.
The term was coined by writer, curator and Los Angeles Times art critic Jules Langsner in 1959 to describe the work of painters from California, who, in their reaction to the more painterly or gestural forms of Abstract expressionism, adopted a knowingly impersonal paint application and delineated areas of color with particular sharpness and clarity. This approach to abstract painting became widespread in the 1960s, though California was its creative center.
Other, earlier, movements, or styles have also contained the quality of hard-edgedness, for instance the Precisionists also displayed this quality to a great degree in their work. Hard-edge can be seen to be associated with one or more school of painting, but is is also a generally descriptive term, for these qualities found in any painting. Hard-edged painting can be both figurative or nonrepresentational.
In the late 1950s, Langsner and Peter Selz, then professor at the Claremont Colleges, observed a common link among the recent work of John McLaughlin, Lorser Feitelson, Karl Benjamin, Frederick Hammersley and Feitelson's wife Helen Lundeberg. The group of seven gathered at the Feitelson's home to discuss a group exhibition of this nonfigurative painting style. Curated by Langsner, Four Abstract Classicists opened at the Los Angeles County Museum of Art in 1959. Helen Lundeberg was not included in the exhibit.[1] These painters are currently being featured in a touring exhibition called "The Birth of the Cool" in California museums along with midcentury design, music and film.[2]
Four Abstract Classicists was subtitled California Hard-edge by British art critic and curator Lawrence Alloway when it traveled to England and Ireland. The term came into broader use after Alloway used it to describe contemporary American geometric abstract painting featuring "economy of form," "fullness of color," "neatness of surface," and the nonrelational arrangement of forms on the canvas.

From Wickepedia.
Posted by Lori Ellison at 4:59 PM