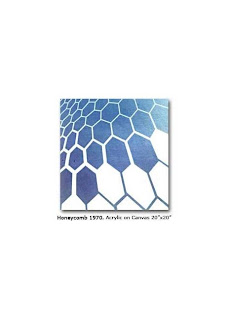 These are later paintings of June Harwood's entitled Honeycomb and Caught. The research I was doing on Pop Aporia, and how the more serious and disciplined hard edge and minimalism got more humorous by subtle injections of pop references, was based on the idea of the visual pun, and a certain perspectival humor that came about in the eighteenth century:  for example, the aphorisms of the scientist G. C. Lichtenberg who discovered the electron tree - also known as the Lichtenberg Figure - that adorns the cover of the New York Review of Books edition of The Waste Books, translated by R. J. Hollingdale. (The nryb imprint, as it appears in lower case designation on the spine of the books, is the most exciting selection of new editions of European and other lost or underknown classics to appear in a long time, and additionally beautifully designed and art directed in the choice of paintings and images on its covers, and their  resonance with the contents as well. Of course Lichtenberg discovered the image depicted on the front and wrote The Waste Books so this coupling originated solely with him - a very fine, and completely logical, matching of image and author indeed. That reminds me I once asked a scientist if pure objectivity was something much valued in science why "elegant" and "revolutionary" were two of the preferred - if not the most downright common adjectives used by scientists themselves. He smiled a big immediate smile and said "that makes me think of something," -  but he hasn't gotten back to me on his Eureka moment yet.) An aphorism I had enlarged through xerox in German to put over my work area when at the Virginia Museum in the early nineties, which I am afraid I don't remember in German (not having gotten very far with my studies in it) read in English: "It astounded him how cats have two holes in their fur for exactly where their eyes are."

Closer to June Harwood's paintings, an eighteenth century wag (cannot trace this one) described a net as a collection of holes held together by string.
Posted by Lori Ellison at 5:17 PM