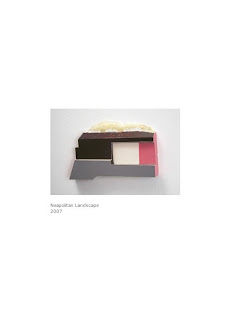 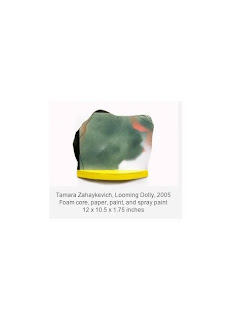 I create sculptures using foam core, paper and paint. I use the low-tech materials of model making for their association with the mundane and their lack of pretension. I also include studio detritus such as scraps of foam core and paint mixing palettes, which reflect my fondness for frugality and jerry rigged construction. My sculptures accrue meaning from this reuse and reassignment of materials. They are reformed and juxtaposed to be seen anew.

My late grandmother, Babcia, was an immigrant from Western Ukraine where my mother was born. She spent many years living in Poland with the family until coming to Newark, NJ in the 1960’s. My mother told me that when my grandmother was a young girl, her family owned a business, she rode horses, had a seamstress, and someone even braided her hair! During the war, her family lost everything and was very poor.

My Babcia had to become very resourceful to survive which is one of the qualities I most admire about her. She could take any old scraps in her refrigerator and cook up a delicious soup on request; clothes that didn’t fit came back to life with minor alterations; embroidered tablecloths and doilies spruced up the saddest furniture. Despite being frugal, she was also very generous. Everything she created made those around her feel special.

These admirable qualities are my artistic heritage from my Babcia. We both create beauty and nourish our bodies through our creative activities. I often think when I am in the studio that the scraps of foam core, with their random shapes and accidental drips of paint, that I use in my art, are as nourishing as the bits of carrots, beets, and onion skins used in making Babcia’s soups.


This is Tamara's statement from her website: it goes very importantly with the text of Femmage, by Melissa Meyer and Miriam Shapiro, with their emphasis on Waste Not, Want Not, and Rauschenberg's description of growing up on a farm, and David hammons' writing about the way things are made by Blacks in the city, in Harlem, and the Great Migration to the cities in the north - immigration from rural parts of Europe, or changing fortunes due to revolutions and similar upheavals. I had seen her work in a show in Feature titled Lost Sock Drawer.
Posted by Lori Ellison at 4:49 AM