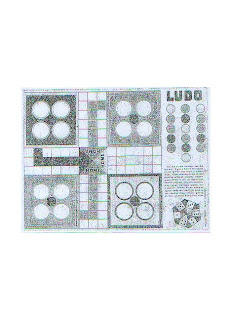 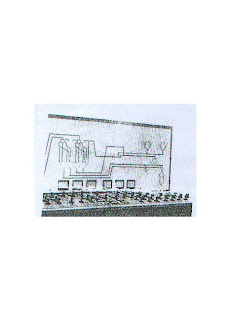 The English Ludo board game is from Robyn Denny's collection and the wiring diagram or control board for electrical systems from Roy Ascott's; and the following is an excerpt from David Mellor's book on British Art centred in London in the early Sixties:

The first English reception of semiotics - Tomas Maldando's "Notes on Communication' were published in Uppercase, [an important literary and poetry journal in the latter Fifties up through the Sixties] - arrived at the time that the notion of 'communications' as an all-embracing area was making giant strides. The components of behaviorism, sociolinguistics and cybernetics all signified a technical future. The first government report on automation had been published in 1956 and the Independent Group at the ICA had revelled in the iconography of robotics, culminating in arranging for Robbie the Robot - from the film Forbidden Planet - to open 'This is Tomorrow' in the late summer of 1956. later, as the Sixties dawned, the fantastic Independent Group element paled beside the matter-or-fact implementation of systems and information processing within manufacturing and management.
The future would be cybernetic, electronically signed: that it had already arrived and might be a resource for artists was evident in the centre spread 'found object' photographs in First 2, the St. Martin's sculptor's magazine, in 1961. [...]the centre pages showed signalling equipment - snaking cables and switch boxes - on the electrified Southern Region of British Railways.
As early as 1957 Lawrence Alloway had drawn attention to film scenographies that used 'the saturation of an environment with communication devices,' while 'Situation' artists such as Smith and House had both referred to urban signalling systems. Denny, in his Molton Gallery exhibition of November 1961, had included paintings which carried 'analogies to such forms as...control boards.'

I would like to note here that Lawrence Alloway as a writer and curator for the Institute of Contemporary Art in London, put together the Situation show that Denny was a prominent member in. The title's ties to Situationism are very close, as the 1952 Lettrist International renamed themselves at a conference European avant garde artists as the Situationist International in 1957, whose later explosion in Paris in 1968, when the future had caught up with everyone in a way that had to be fought against, is very well known.
Posted by Lori Ellison at 6:22 AM