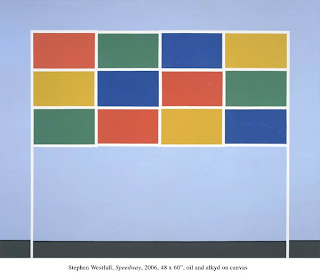 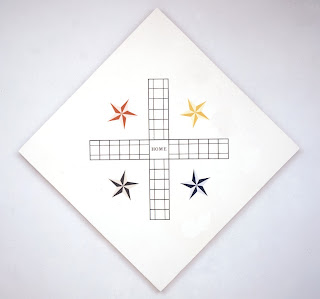 I find it interesting that both Peter Halley and Stephen Westfall were born in 1953, the same year Poger Price came out with his first book of Droodles which swept the nation in the following years and became a televised game show, and was somehow still hanging around my first bookstore in 1981 to amuse us there. His painting Game from 1991, below at the bottom, is based on the Ludo concept posted from Robyn Denny's collection, Robyn Denny's early work which I could not find a good image of, having been remarked on by several writers as a precursor for Peter Halley - who also started showing diagrams painted directly on the wall, and was interested in the semiotics and ideas of the sign the English had been so excited by in the late fifties, when this discussion really gathered energy in the late seventies and early eighties. (See Francois Cusset's book, translated from the French by Jeff Fort French Theory: How Foucault, Derrida, Deleuze, & Co. Transformed the Intellectual Life of the United States, 2008. especially pertinent is the chapter entitled Art Practices although the whole book is recommended as something we are still understanding art through, amongst other lenses.
Posted by Lori Ellison at 12:15 PM