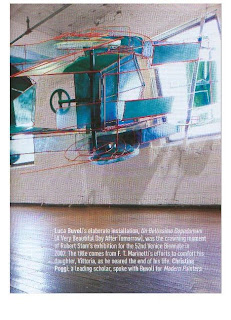 I had met Luca Buvoli in 2001 at the Greater New York show by standing in front of the monitor showing an animated work of his and trying to explain by describing in detail to my then poet boyfriend, who was new to the art world, Buvoli's show I had seen in the Drawing Center with its wires with wiry objects coming off of them encrusted with tin foil and cellophane, that when one got to the right angle spelled out "Not a Superhero." I was then telling my boyfriend how when I saw Marisa Merz's word piece at the Guggenheim of Italian art from the mid forties to mid seventies coming off the wall with wires spelling out B E A and wondering if he had seen her work before having the show when a tall young man stepped from behind the monitor and said in very Italian accented English, "I am Luca Buvoli." He said he had not seen her work before but when he did it made him very happy.

The reproduction is from the current issue of Modern Painters, just one page of a piece he did based on Marinetti's car using the painting ideas based on collating stop action photography into a depiction of movement on canvas, sculpturally achieved.

At the Futurist event he had an animation of profiles of people speaking very much slowly and more strangely the Manifesto that Marinetti would perform in theater halls; the speakers are aphasic - in his interview in Modern Painters there is a lot of discourse on why he used aphasic speakers, however experiencing the video makes these words haunting in the most moving way and was an excellent contrast to Charles Bernstein's magisterial re - interpretation right next to the monitor's ongoing loop of the animation.

After leaving MoMA around 2 pm for the Futurist Event I walked through Central Park and stopped at the Metropolitan and then the Guggenheim bookstore on the way to a panel discussion much later in the early evening at the National Academy (including David Diao, Mona Hatoum, and Amy Sillman as exhibits to be discussed) and found the catalogue to the Italian exhibition and looked at the three pages on Marisa Merz and especially at the B E A piece again. I had stopped in the Museum of Folk Art and found a book on another woman Italian artist there. Her name is Carol Rama and it was the catalogue for her retrospective which was in Trento and then in Gateshead in the UK - funny to purchase the book in that bookstore, I can assure you Carol Rama is no self taught or outsider artist.
Posted by Lori Ellison at 9:19 AM