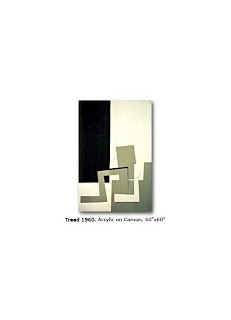 In researching a show several years ago titled Pop Aporia I found June Harwood's website and emailed her and even talked to her on the phone for awhile about the show, a Hard Edge abstract painting show with relations to Pop Art.

June was married to Jules Langsner who coined the term Hard Edge Lawrence Alloway picked up and organized the show in England around, and she was an integral part of the group in Los Angeles delineated in the citation below, but I was disappointed to find in the catalogue for The Birth of the Cool that she was listed in the index but that there were no reproductions of her work. I wish this reproduction were larger but it is one of the earliest group of paintings on her website and part of the cool being given birth to right at 1960, the cusp year for this show and its concept (conception) which I will now write some about.
Posted by Lori Ellison at 5:02 PM