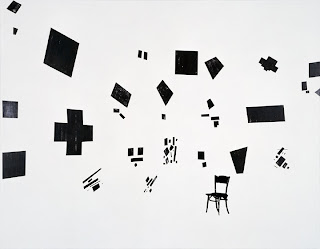 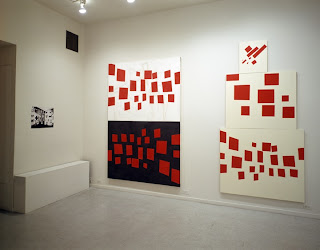 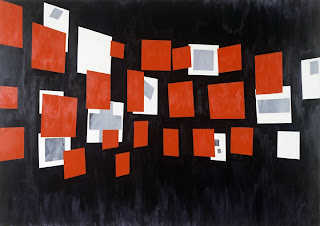 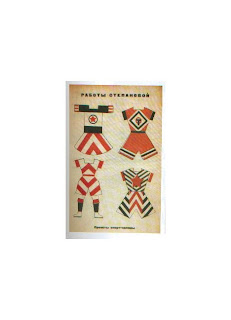 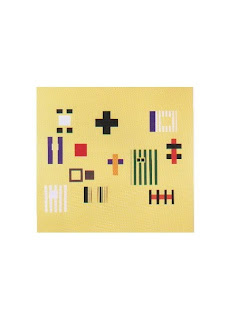 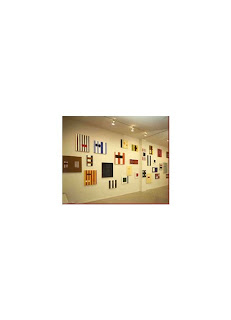 David Diao, whose interview with Peter Young about art in the late sixties and early seventies is included in the catalogue to High Times Hard Times, the show curated by Katy Siegal and David Reed, is quoted by Michael Corris in his essay accompanying the monograph David Diao: Works 1969 - 2005 as rethinking his painting during "the emergence of appropriation as a signal stategy in art" in the early eighties. Diao completed his first breakthrough paintings of Malevich's exhibition 0.10 in 1984, with the perspectival tilt of the arranged paintings as a motif for the exhibition at Postmasters pictured here. The Little Suprematist Prisons, a working through of Motherwell into a series of more hard edged designs, is included in Joe Fyfe's essay on Stripes for Artcritical online, and the photograph of the wall is from his exhibit at Postmaster in 1986. He currently has an exhibition at Postmasters, where the catalogue mentioned above is also available.

The third images is Varvara Stepanova's designs for sports clothes in 1923 from Imagine No Possessions: The Socialist Objects of Russian Constructivism by Christine Kiaer, MIT Press 2005. Constructivism, like Bauhaus and de Stijl, was not interested in pursuing any notion of the artist as individual genius, but interested in what in Latin languages is "popular" - of the people - and designing a new life in architecture, furniture, clothing, and poster and graphic design - and in this book, advertising, as envisioned in a socialist country.

Untitled. Yellow (1987) has this commentary by Corris: "The historically aware spectator approaches these paintings like a punter participating in a pub quiz, satisfied that he knows not the sources. But Diao's game is not to present a puzzle; what counts is how the artist articulates the internal relationships the signs employed."

The hypothetical spectator sounds so remarkably British, one wonders how this punter would view Alan Uglow's paintings and see how much is based on football fields - but perhaps the recordings of crowds sometimes accompanying Uglow's exhibitions would give it away.
Posted by Lori Ellison at 12:24 PM