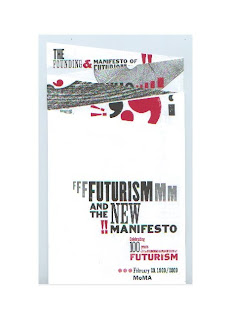 I am breaking into Ad Hoc shop for several postings on that great Cabaret and big theater spurred by Marinetti, Futurism. The current issue has a campy cover and interview with Maurizio Cattelan but more importantly Luca Buvoli, and other Futurism discussions are happening everywhere in this centenary year of the foundations of the movements, led or successfully interpreted and promoted for the first time by poets as was often the case in those days, but filled in visually and conceptually by exhibitions of painters. In Marinetti's case it was definitely a case of being led.

The day before yesterday I attended Poetry Magazine's Futurism Event at the Museum of Modern Art, where Charles Bernstein kicked it off with a powerful and forceful reading of the manifesto, with the delightful ironies of his reading "none of us is over 30" (Bernstein is a few years past thirty) and when he got to the lines on museums, in the Museum of Modern Art, the irony was quite enjoyable to the gathered audience, it was time to laugh out loud: - "Museums, cemeteries! Truly identical in their sinister juxtaposition of bodies that do not know each other. Public dormitories where you sleep side by side for ever with beings you hate or do not know. Reciprocal ferocity of the painters and sculptors who murder each other in the same museum with blows of line and color. To make a visit once a year, as one goes to see the graves of our dead once a year, that we could allow! We can even imagine placing flowers once a year at the feet of the Gioconda! But to take our sadness, our fragile courage and our anxiety to the museum every day, that we cannot admit! Do you want to poison yourselves? Do you want to rot?"

This performance was in the lobby on the steps in front of the sculpture garden with streams of visitors going by, not quite registering as they glanced over to get on to the second and further floors. When Bernstein got out a hammer at the part about blows he approached the Miro with a savage gesture bearing an ordinary hardware hammer, and then went over to the free issues of Poetry Magazine carefully stacked on a table and swept a large group of them violently across the floor, it was more of an attention getter for the passersby, some stopped to see what it was all about and some to pick up free copies as the floor seemed to make it more clear that one needn't pay for them.

I had especially gone to see Luca Buvoli's animation, to meet Lee Ann Brown there who is my cohort and founder of Ad Hoc Shop and see her colleague Charles Bernstein read, but had emailed her asking if someone would be reading Mina Loy's Aphorisms on Futurism, which are included in her collected work entitled The Lost Lunar Baedeker. Here is the posting from a little more than a year ago on James Geary's website. James Geary has written an excellent history of aphorisms entitled The World in a Phrase, and the most globally oriented compilation of aphorisms ever attempted in English, (and incidentally has published my aphorisms twice on his website). Here is his posting:

All Aphorisms, All The Time

A blog by James Geary about Aphorisms

Mina Loy always considered herself more of a visual rather than a verbal artist. She was born in London in 1882, and first established a reputation as a post-Impressionist painter. She lived in Paris during the early years of the 20th century and was involved in all of the artistic movements of the time: dadaism, futurism, surrealism. She moved to the U.S. in 1916, and in 1921 Ezra Pound wrote to Marianne Moore, editor of Poetry magazine: “Is there anyone in America except you, Bill [William Carlos Williams] and Mina Loy who can write anything of interest in verse?” One of Loy’s verses, “Aphorisms on Futurism,” is an aphorism sequence as much as it is a poem. My thanks Lori Ellison for alerting me to Mina Loy. Excerpted aphorisms:

THE velocity of velocities arrives in starting.

LOVE the hideous to find the sublime core of it.

LOVE of others is an appreciation of one’s self.

MAY your egotism be so gigantic that you comprise mankind in your self-sympathy.

TIME is the dispersion of intensiveness.

THE Futurist can live a thousand years in one poem.
Posted by Lori Ellison at 8:29 AM