Harry Smith and the Anthology of American Folk Music 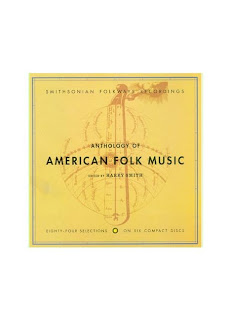 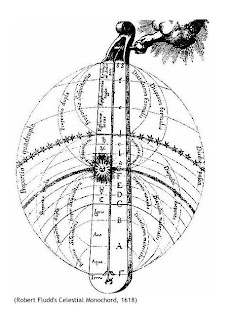 A monochord is an ancient musical and scientific laboratory instrument. The word "monochord" comes from the Greek and means literally "one string." In the monochord, a single string is stretched over a sound box. The string is fixed at both ends while a moveable bridge alters pitch.
(...) In 1618, Robert Fludd devised a mundane monochord (also celestial or divine monochord) that linked the Ptolemaic universe to musical intervals. An image of the celestial monochord was used on the 1952 cover of Anthology of American Folk Music by Harry Everett Smith and in the 1977 book The Cosmographical Glass: Renaissance Diagrams of the Universe (p. 133) by S.K. Heninger, Jr.

See both the original etching and the Harry Smith cover using it in the background, left.

The diddley bow is an American string instrument of African origin. It is typically homemade, consisting usually of a wooden board and a single wire string stretched between two screws, and played by plucking while varying the pitch with a metal or glass slide held in the other hand.
The diddley bow is significant to blues music in that many blues guitarists got their start playing it as children, as well as the fact that, like the slide guitar, it is played with a slide.
A notable performer of the instrument was the Mississippi blues musician Lonnie Pitchford, who used to demonstrate the instrument by stretching a wire between two nails hammered into the wood of a vertical beam making up part of the front porch of his home. Pitchford's headstone, placed on his grave in 2000 by the Mt. Zion Memorial Fund, is actually designed with a playable diddley bow on the side as requested by Pitchford's family. Other performers who use the instrument extensively are New York City-based jazz pianist Cooper-Moore, and American bluesman Seasick Steve.
Posted by Lori Ellison at 6:54 AM