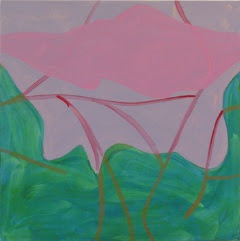 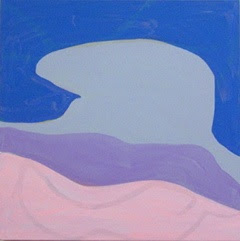 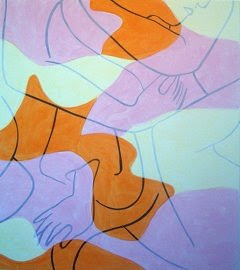 I had said that a certain Modernism privileges novelty and ideas of order - that is the eye on authority that Matisse was not so fixated on, as someone who was not particularly interested in either reform or rebellion: he shows something very early on which I would call a certain kind of sturdy, peaceful, confident maturity, which doesn't imagine changing the world; just being one of the best painters ever within it. Marina Adams has certainly been paying attention to Matisse, through her own eroticism and innovation, and this is why I wanted to pair her with Victor Kord.

Marina Adams had an Alma Thomas quote for her exhibition - the small catalogue is still available at Cue and it is still also on the website. This is interesting to me as Alma Thomas has sorted out to be my most important experience of a painter in my life to date as that is what my body and my skin have told me. Thomas' show at Rosenfeld is the first time and may be the only time I ever got gooseflesh from an exhibition of paintings. I used to be a music critic and gospel and classical were the only ones to cause gooseflesh consistently as genres with other moments (usually live) also stepping in, and I had not really thought of visual arts as something that would ever give me this kind of prickled awe. So: Marina Adams working through the lost music and song of Hebrew still coming through the imagery and beauty of the Song of Solomon and Alma Thomas' musical abstract joy and some of her knowledge of a vital spring palette (with a great deal of her own color sensibility evident), and Matisse's lines, abstract forms and figuration is not so surprising as a thread runs through it all, Eros and Joy.

Victor Kord also talks about jazz, which is tied to Matisse through his book Jazz.

With Marina's painting, who happens to have been born in October of the same year I was born, I think of Al Green. I once made a riddle asking what Al Green and Tantra had in common that had a short but definitive answer rendered obsolete by Chris Quirk's wife Amy Madden's immediate and definite response - "alot."

I had also paired Marina Adams with Victor Kord because she is married to Stan Whitney, who turned out to be one of the great teachers at Tyler for me, and doubtless many others, before retiring just a few years ago. (He was a student of Al Held's and his old school Tough Love teaching was Al's famous toughness and his more abstract but nonverbally present benevolence were well combined). I was explaining to Stan at Mira Schor's opening the Al Green metaphor in Marina's work after the more obvious discussion of Matisse, and he started to walk away as I was saying "It's a woman thing!" - he laughed, it was always a pretty hearty laugh and good to hear as a student at Tyler.

"It's a woman thing." It certainly is, Thomas' work is womanly, and also mature as I had said earlier about Matisse and so is Marina Adam's, in direction. I have been thinking for years about maturity in modernism - and postmodernism (even rarer). Victor Kord's and Marina Adams' work enfolds both modern and postmodern notions into a work that might have been starting out from the beginning with a focus on maturity - it certainly looks and feels that way.
Posted by Lori Ellison at 1:17 PM