Andrea Way, The Calendar, The Grid, and the Idea of Wonder 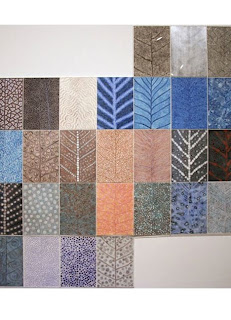 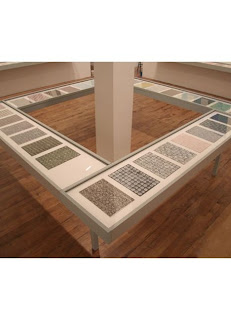 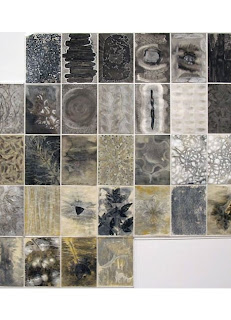 The Greeks considered what we would call in English Wonder an important emotion, as leading to philosophy - wonderment leads to wondering which leads to seeking to know the world further. Pierogi itself has been a Cabinet of Wonders, quite well known for its extra high level of accomplishment in craft, artisanship, and the intensity of commitment to mining a particular path, amount of puzzle thinking and brainwork behind this commitment, and often the sheer amount of time devoted to making each piece. This sometimes leads to a certain kind of wonderment, quite sepecific, to such an extent that I have affectionately nicknamed it the Ripley's Believe it Or Not effect, when taken to the FX level of a Robert Lazzarini.

Andrea Way is more in the lineage of Karen Arm and Greg Stone - especially Greg Stone as they met long ago at an exhibition at the Clocktower devoted to labor intensive work. I do think about the difference between mystery thinking and puzzle thinking, as there is a difference in magic in its one sense and the cabaret magician sense. Tom Friedman for example is an excellent cabaret magician, probably the best. I had a studio visit with him and I impulsively said that his work reminded me of my father, who had a magic show for the children in his small town where he grew up and used to pull card out of the air and coins out of our ears. He looked at me in a very strange way and I didn't understand this look until I read an article later where he talked aobut the magic shows he used to do with his brother. I find this genre of work, where the mystery is how someone solved there own puzzles, entertaining but quite controlling - I like more room for my own reverie, rather than participating in the general audience's oohs and ahs.

Andrea Way's work in this show reminds me that the first life drawing I did was in fifth or sixth grade when we were asked to make drawings based on a microscope. That this was a source of wonder and intense and serious pleasure would be evident in the kind of drawings and paintings I do based on some of this source material abstracted, its just that Andrea Way's exhibition 365 Days took a more obvious engagement with nature viewed either this way or up close with real leaves, and other objects found so often on the same streets leaves fall on (a whole suite of pennies) and arranged the months either in calendars on vitrines, is a stunning accomplishmetn, and I wrote about Andrea's show and Katia's together because they fall so close to my own sensibility that my nascent collector that does what I call Theoretical Shopping (what I would purchase if I indeed had the money to purchase) gets baffled - instead of one drawing painting or object from an exhibition it was in both these shows, well about six or eight or in Andrea's 365 works on paper, it went into overdrive, and in the months I have chosen here, February (top) and March (bottom) it would be so nice to own the whole month.

The calendar is a grid we live by; it is fairly as ancient as a way of dividing the year as irrigation is as dividing the landscape, although the grid of our wall calendar is less ancient as children it is the way we learn to tell days as we look at clocks to learn time. It is quite possible that many artists swear to make a drawing a day. (I know I once did every evening after work but it was before I really knew what I wanted to draw and how to draw it, the archetypal two questions involved in the making of anything, and I only got a few weeks into it before I abandoned the project.

Andrea Way has met all the usual criteria for Pierogi's unusually high standards for inclusion in their now well known sensibility listed in the first paragraph, and added the wonder, which is the quotidian mystery - and magic - based on a close observation of nature, and the ordinary, and the close at hand.
Posted by Lori Ellison at 12:40 PM