Katia Santibanez, Landscape and the Grid, and the Idea of Paradise 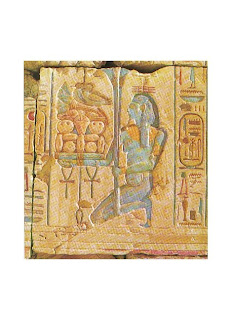 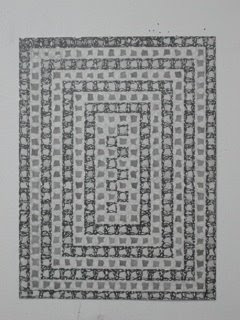 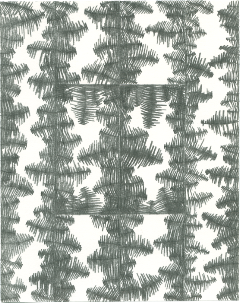 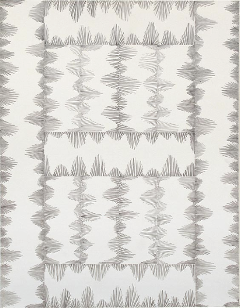 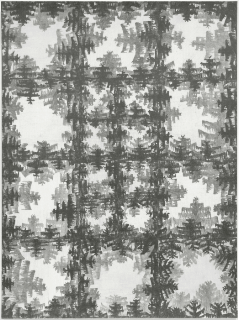 The first image to the left is Hapi, the god of the Nile; he inundates the Nile every year with his amphora of water and on his head he has a grid. the grid represents the irrigated fields that are fed by the waters of the Nile. This is the earliest representation of a grid imposed on the landscape I have found in my books and my research.

This leads into the entire history of garden design, which has often been based on an implicit or underlying grid; this is from an Iranian cultural website regarding some of the earliest and most well documented and now archaeologically studied garden design:

Since the first millenium B.C.E., the garden has been an integral part of Persian architecture, be it imperial or vernacular. In addition to written historical references, archaeological evidence of Achaemenid gardens exists at Pasargadae, Persepolis, Susa, and other sites.

The Achaemenids had a keen interest in horticulture and agriculture. Their administration greatly encouraged the efforts of the satrapies toward innovative practices in agronomy, arboriculture, and irrigation. Numerous varieties of plants were introduced throughout the empire .

Aside from the practical aspects of the garden and its sensual pleasures, royal gardens also incorporated political, philosophical, and religious symbolism. The idea of the king creating a fertile garden out of barren land, bringing symmetry and order out of chaos, and duplicating the divine paradise on earth, constituted a powerful statement symbolizing authority, fertility, and legitimacy.

What made gardens special during the Achaemenid reign was that for the first time the garden became not only an integral part of the architecture, but was also the focus of it. Henceforth gardens were an integral part of Persian culture. Successive generations of European and Asian monarchs and garden lovers copied the concept and design of Persian gardens

The earliest gardens on the Iranian plateau associated with the Achaemenids are located at Pasargadae, the royal park residence of Cyrus the Great (ca. 559-530 B.C.E.), the founder of the Persian empire. The royal palaces at Pasargadae were conceived and constructed as a series of palaces and pavilions placed among geometrically designed gardens, parterres, and meticulously hewn and dressed stone water-courses, set in a large formal park containing various flora and fauna.

From the time of the Achaemenid empire the idea of an earthly paradise spread to the literature and languages of other cultures. The Avestan word pairidaêza-, Old Persian *paridaida-, Median *paridaiza- (walled-around, i.e., a walled garden), was transliterated into Greek paradeisoi, then rendered into the Latin paradisus, and from there entered into European languages, i.e., French paradis, and English paradise.


The pleasures of Katia's work are very rooted in her observations of nature and conversations we have had about the European garden, prior to the English Romantics and their less classical way of ordering gardens and parks in a much more gridded and architectural way. Until researching the above I had not known of the connection to paradise, which has no doubt been influenced by the Romantic view of a wilder yet somehow completely benign nature and Edward Hicks style paintings, having removed both the ordering and architecture within and the wall without. I have written about the five main longings that are subjects for art, are for:

Paradise, as we could easily imagine envisioning it, would be 1) the right measure of nostalgia of the most pleasing kind, with all of our memories that are most beautiful to us intact and ready to revisit, 2) and 3) with the novel and the exotic around the corner of the most pleasantly strolling walk, and 4) the erotic in its expanded sense of pleasing voluptuousness on our skin through the perfect temperature, soft sunlight, and a light breeze. This is a small taste of paradise available for so many centuries to all who peacefully stroll through a park or a garden, all the senses alive and awakened. There are not a few aficionados of botanical gardens and the history of landscape architecture of other times, and Europeans have the good fortune to still have so many pre Romantic gardens and parks laid out in the most impeccable ideas of order designed since the migration of ideas of the garden from fifth century BC Persia above that one can experience and then reimagine what the believers may have imagined themselves: to inhabit a place much like this lovely experience, walled off from any harm or even irritation, forever.

I actually had a studio in the village of Versailles for nearly three years in the late eighties while living at Odeon on the Left Bank in Paris. It wasn't even five minutes from the gardens of Versailles which were permanently free and open to the public - breaks in painting on beautiful days were often spent there, a very large area of ground arranged for a long view vista from the balcony of the grand outdoor mezzanine in the back of the Palace. Katia and I had talked in passing about her relation to French landscape and especially the design and architecture prior to the 19th century, but not in any kind of didactic way.

This is what I will try to write about experiencing the back room of her show at Danese, that I went carefully through with Michelle Segre, an artist I also plan to write about, the night of the opening. The paintings have been focussed on elsewhere by good reviews in both the Brooklyn Rail and by Lilly Wei in Art in America, so I would like to try to describe what I felt then, in terms of the research I have done now.

That a very measured implication of grasses and botanical forms are so innovatively and delicately delineated in grids and designs in graphite - a medium that I had thought incapable by now of arousing much interest qua medium no matter what was rendered - now has been awakened from its small torpor by Katia's singular touch and skill in handling is certainly a testament to the wonderfully pleasurable novelty of someone actually balancing the five longings above, longings that are certainly are embedded in us by Nature herself, in such a measured, quiet. confident, persistent, and absolutely present way.
Posted by Lori Ellison at 1:41 PM