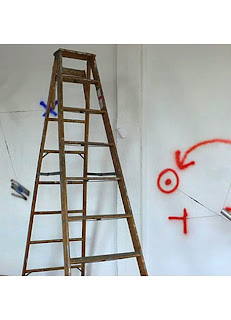 Full disclosure: working for Lennon Weinberg was my very first job arriving in New York in the summer of 1996. Robin Hill was subletting her Greenpoint studio (where I could go peer into and even nose around Kim Jones' room he was subletting from Robin, as he never locked it and the door was usually half open.) Robin suggested I go in and talk to Jill Weinberg and Tom Adams and I so enjoyed the two brief times that I worked at their old location in Soho I have not yet lost the habit of going in to see every show I can and talking to them twelve years later. Peter Soriano was doing sculpture in a vein that was a genre that Andrew Chesler had organized a successful exhibition of in the late Nineties titled "Almost Something.' It was a great title and an exciting Dr, Seussian World with an entire crayola box of possible colors sensibility, and Peter Soriano did it I thought better than just about anybody.

In 2007 I went into his show at Lennon Weinberg and the new wire and spray paint sculptures were in the gallery and I read he had just come back from the Calder Foundation in France and said look at how he is drawing Calder with the spray paint. (I had grown up going to the new I. M. Pei wing of the National Gallery in DC where it is impossible to ignore the massive mobile in the lobby, had seen one of the most amazing exhibitions in Paris entitled Calder Intime at le Musee de Les Arts Decoratifs in the eighties, the Circus on permanent exhibition there, and an exhibition of Calder in the summer of 1998 at the Corcoran in DC, in addition to books in every bookstore I had worked in since 1982, and never understood why he wasn't more talked about in New York.

When I went to his studio I was talking about taking ideas from the city and the streets into the studio as the major theme - along with ideas from rural areas and how they migrate to the city. and mentioned some of the ways that things are cordoned off and temporary signage with spray paint used by construction crews. in the course of our discussion. Today on Peter's website in a long, well written and considered essay written by Raphael Rubinstein for a major exhibition I found this paragraph:

"Indeed, when I first saw these works one of the associations that came
quickly to my mind was precisely those spray-painted arrows and words
one sees everywhere on the streets and sidewalks in New York,
especially these days when the city is in the midst of a building
boom. I’m not so sure about the “clarity” of Con Ed street markings
however; many of them have an almost hieroglyphic impenetrability, at
least to the casual passerby. By contrast, Soriano’s marks are easily
readable, though not without their own ambiguities. By my count, he
uses nine basic signs: arrows, dots, circles, Xs, zigzag cancellation
marks, squares or rectangles, brackets, horizontal lines closed off by
short verticals on either end (a kind of elongated uppercase H), and
the sideways Ts. These can be combined to create a larger graphic
lexicon. "
Posted by Lori Ellison at 9:46 AM