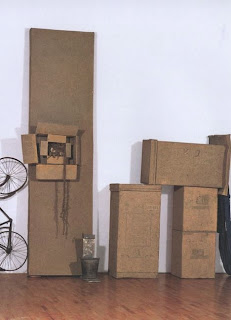 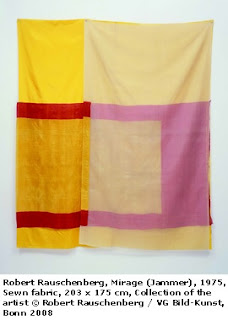 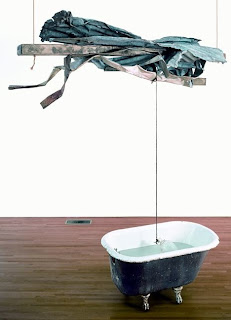 Rauschenberg used only found bits of cardboard in this series created between 1971 and 1972. His decision to restrict his materials to cardboard and cardboard boxes coincided with his move to Captiva Island in southern Florida: following a very successful period in New York, Rauschenberg was looking for new ways to concentrate; the move took place in 1970 and the artist was looking for a material that he could get anywhere in the world for his new series: "I still haven't been anyplace where there weren't cardboard boxes ... even up the Amazon." (Rauschenberg 1991)

Rauschenberg was the first artist to use only cardboard for large format assemblage paintings, sculptures and installations without treating it as painterly decor or subjugating it in any way. He discovered the expressive quality of packaging materials and united the language of formal abstraction with that of real life while completely preserving the material's character. It was precisely this material, which is usually discarded, on which he concentrated his attention: "... A desire built up in me to work in a material of waste and softness. Something yielding with its only message a collection of lines imprinted like a friendly joke. A silent discussion of their history exposed by their new shapes. Labored commonly with happiness. Boxes."

In 1975 Rauschenberg worked for a month in an ashram in Ahmedabad, India, a center of textile production. After returning home, he executed a series of works in 1975 and 1976 called the 'Jammers,' which were true bursts of colors. "I never allowed myself the luxury of those brilliant, beautiful colors until I went to India and saw people walking around in them or dragging them in the mud. I realized they were not so artificial."

The fabrics used in these works are rectangular, square and triangular in shape and their colors are clear and intense. They are hung either loose on the walls or are attached to bamboo rods like veils in a state of ethereal equilibrium.

The series' name comes from the Windjammer, a sailing vessel, and the titles of the individual works, such as "Pilot" and "Sextant", emphasize the maritime reference. The 'Jammers' are reminiscent of sails on ships, of windbreaks on the beach, of laundry, drying on clotheslines in southern Europe and Asia, of medieval Italian banners or the flags of a Tibetan monastery. The exotic is connected to everything that is close and approachable, the holy with the worldly. As with the Venetian series, the 'Jammers' display the dual qualities of reference and abstraction.
Posted by Lori Ellison at 3:10 PM