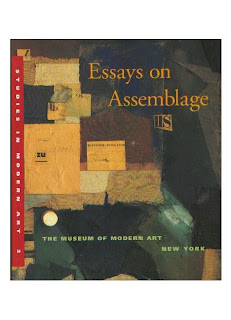 Essays on Assemblage contains The Art of Assemblage: A Symposium

It is the transcript of the symposium held at The Museum of Modern Art, New York, on October 19, 1961, in conjunction with the exhibition "The Art of Assemblage."

From Roger Shattuck's essay How Collage Became Assemblage: "In the late 1950s, Happenings, Pop art, kinetic art and junk art found sponsorship and name. When Peter Selz arrived from the West Coast in 1958, he brought with him the idea of a show titled "Collage and the Object." Apparently Seitz had been thinking along similar lines and was assigned the project that opened in October 1961. After considerable in-house wrangling, Seitz had changed the title to "The Art of Assemblage" in order to avoid the primarily painterly term collage. Seitz believed that assemblage had been coined by Dubuffet in 1953, and provided that information in the catalogue. One wonders why no one connected with the show knew or discovered that Helen Comstock had used the word assemblage when discussing works by the American Arthur Dove in her review of Alfred Steiglitz's "Seven Americans" exhibition. Seitz included three Dove works in this show.


This book and this essay and the following transcript were enormously helpful to find only several months ago after forming the kernel of the show idea from a meditation on the difference between what I found in Lonnie Holley's work and do not in Richard Tuttle's, and then was reinspired to think about by my visit to Joe Overstreet's studio, and Frosty Meyers studio soon after, following the High Times Hard Times show and thinking about the late sixties and early seventies in New York in all the arts and in general - the last real intersection of all the arts in NewYork in both practice and audience before the rise of the MFA system and the arrival of so many so highly trained in their own medium armed with the new theory to prove it. Due to the increasing cost of living dovetailing with the incredible increase of higher education, it was also the last generation able to not arrive seeking immediate employment in an increasingly well trained and exponentially growing pool of competition within each chosen endeavor and medium, which leaves little time to explore let alone attend events purely for pleasure outside of one's field, the reason I am excited to work with a poet on this exhibition, and see what she brings to it, to revive some of that lost spirit in displaying collage and concrete poetry alongside the work and arrange for performance.

Since the running theme I had been investigating myself was how people look around and bring things into their studio in the city, or in a more urbane setting if not quite a grand cosmopolitan city such as ours, or bring things back from sojourns to more rural places or their own roots and backgrounds in the same, I was especially interested in Lawrence Alloway's statement introducing the importance of where something is found, rather than purchased as with Duchamp, and all of the prior discussion of the Assemblage show up until Alloway's late arrival with its relation to Duchamp and Dada. Alloway states quite clearly how what some hastily termed Neo-Dada might not share with these other sensibilities and politics vis a vis modernism's dialogue with itself and the culture surrounding it:

"Aside from the elegance of the show upstairs, I felt very close to it in a way I don't often feel to art exhibitions. I was very close to the "Art of Assemblage" show because the source material, or most of it, was a kind of source material I know, and it was just the same in the work of art as it was when I had seen it not in the work of art - in somebody's house, in a street, a city dump or something...[i]n a way, I think Mr. Seitz in the book for the exhibition established very convincingly the aesthetics of juxtaposition, there is one aspect that was not delved into: the urban street scene, waste lots, garages all that. These seem to me to be the environment we all share, and the articles of the living-space environment I recognize in the show.

The postings begin with a centennial nod to circa 1909 - 1910 when modernism and jazz exploded into the world and crisscrossed the Atlantic, and the Quilts of Gee's Bend and Robert Rauschenberg's Bed piece are discussed, through all the artists considered the core of the exhibition, back to Robert Rauschenberg and the Assemblage show of 1961. I am grateful to have discovered the importance of Lawrence Alloway's attention to the artists themselves and the clarity and literacy of his means of representing them. I had already discovered his importance circa 1960 in the beginning of the exhibition proposal under the title of Pop Aporia (see way way below) and then discovered this quotation right at the beginning of the Assemblage Exhibition (there were, as Roger Shattuck wrote in the introduction quoted above, "252 heterogeneous works in the show.")
Posted by Lori Ellison at 3:34 PM