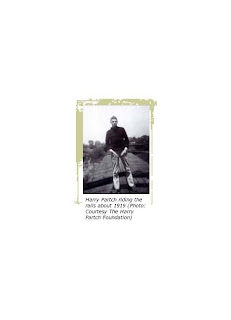 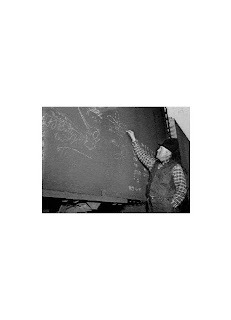 Harry Partch, in 1919, when he was mainly riding the rails.

Texino along with others is chronicled in a journal I bought entitled Mostly True by Bill Daniels. It is billed as The West's Most Popular Hobo Graffiti Magazine. There is a revival of interest amongst young artists and graffiti followers spurred by the idea of these early taggers and the lengths the ywould go to to get both sides of a boxcar and the amount of boxcars due to amount of ground covered, and the many many years they kept it up. The chalk emblems aren't too much of interest in and of themselves, but the interviews with the legendary men who became such by stories circulated by hobos themselves are mighty entertaining. with some of the current fascination with the depression this may become more than just a revival amongst San Francisco based artists and reach a broader audience. Already there had been a revival of freight hopping itself to go along with the magazine and film's audience base.

Bill Daniel's amazing film Who Is Bozo Texino?, chronicles the search for the source of a ubiquitous and mythic rail graffiti sketch of a character with an infinity-shaped hat and the scrawled moniker, "Bozo Texino"- a drawing seen on railcars for 80 years. The film was shot over a period of 20 years and features interviews with hobo graffiti legends Colossus of the Roads, The Rambler, Herby (RIP) and others.

At 29 Harry Partch took 14 years worth of quartets, piano concertos, and symphonic poems, crammed everything into a pot-bellied stove, and torched the lot. Then he started again from scratch.
Over the next forty years Partch would gain cult-level reknown as the 20th Century's most eloquent musical primitive, carrying a solitary niche in outsiderdom. The maverick philosopher-composer-carpenter devised his own 43-notes-to-the-octave scale. He sculpted percussion and string instruments out of artillery shells, Harvey's Bristol Cream Bottles, and driftwood. He camped in hobo jungles and abandoned shipyards, insulted well-heeled and well connected patrons who offered help, and did just aobut everything an artist could do to insure lack of widesread recognition.
As a teen, Partch payed piano in silent movie theaters in Albuquerque and composed ambitious works in conventional western modes. He resented the limits imposed by 12 tempered tones and grew obsessed with the notes between the tones (microtones).
Partch's instruments were fashioned out of airplane fuel tanks, Buick bumpers, eucalyptus branches, and junk scavenged from the California desert. These sonic devices - all objects of stunning beauty - received intriguing , such as Chrychord, Drone Devils. Zymo-Zyl, and Quadrangularis Reversum. The Mazda Marimba, named after the Persian God of Light, displays banks of tuned light bulbs and sounds like a percolating coffepot.

There are two documentaries on Partch I mentioned in the last posting, and both can be found on You Tube. The BBC documentary has composers and musicologists speaking aobut Partch including Phillip Glass.
Posted by Lori Ellison at 2:25 PM