Holland Cotter and Michael Kimmelman from the New York Times and their take on John Outterbridge, Sarah Braman and Richard Tuttle 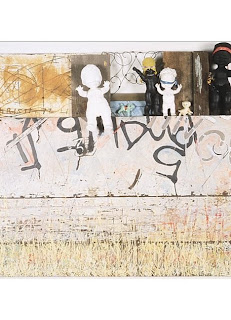 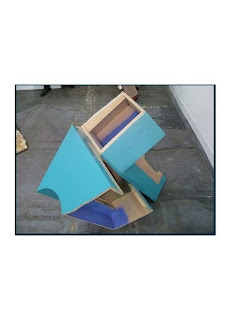 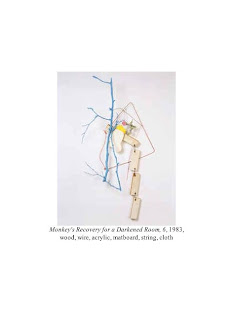 It was gratifying to pick up the Times this week and read Holland Cotter's report on this years big Art Fair in the city and find these two quotes including John Outterbridge and Sarah Braman just after putting this show together online at least (it is still pending in the proposal stage at the University Gallery Lee Ann Brown and I have contacted at his point). So I am happy to include his two choices out of the very few he did mention in his coverage of the vast and stupifying array these formerly proliferating art fairs have been laying out for their customers:

"There are exceptions. One is Mickalene Thomas’s “Something You Can Feel,” a kind of Byzantine mosaic of a painting at Rhona Hoffman that’s done in rhinestones and acrylic and generates all kinds of attitude. Another is a sardonic picture conflating military invasions and gym workouts by the Iranian artist Tala Madani at Lombard-Freid Projects. A meticulously knotted and twisted wall sculpture by the assemblagist John Outterbridge at Jack Tilton is a third."

Te first reproduction is a piece by John Outterbridge titled And In the Hay children Won't Play from 1991. Outterbridge was born in 1933.

"Sarah Braman’s sculptures at Museum 52 have a similar hapless but happening air. They look like a closetful of broken furniture that is slowly mending itself."
The second piece by SArah Braman I unfortunately don;t have a title and a date for is a piece I found on the blog Anaba that I have been dipping into for three years now, thank you Martin.
I don't know when Sarah was born, but there is enough of an age difference between herself and Outterbridge to tip off any curatorial participant or tracker of curatorial buzzwords to the idea that I am thinking in terms of The Intergenerational. Well, I have studied art history. There are lineages such as assemblage I am glad to find as far back as the 1870s where a shoe was stuck onto a painting, and food sculpture also displayed long before the Futurist Cookbook, both at the Salon des Incoherentes. The other art history I have been delighted to include is Melissa Meyers and MIriam Schapiro's essay on Femmage and Aime Cesaire's theories of Negritude discussed by David Hammons coming directly from practicing artists and the Essays on Assemblage publication published by MoMa which have influenced this particular choice of artists very much.


Which leads me to another underpinning of the show, something I have had to think about over the ears due to the amount of general attention given two artists in New York and its circles of influence: why I am indifferent to Richard Tuttle, and also the talented daughter of Judy Pfaff and Richard Tuttle, Jessica Stockholder.

My ideas for Ad Hoc Shop were already forming based on a memory of seeing Lonnie Holley's sculpture in the Visionary Art Museum and its spareness and inventiveness of what was casually yet magically composed about what was attached to the stretched wire and this sensation of seeing something so very very different from the usual in the always for me rich world of possible discovery in the self taught and outsider art worlds. I had noticed a long time ago that the statistics of what I would actually respond to in this category which seems fraught for some were not that different than what I responded to in the fine arts world, that is - very little.

Richard Tuttle has an enormous amount of enthusiasts who have tried to convert me over the years and it isn't that dissimilar to trying to convert me to any belief, I am very happy to listen to and hear the enthusiasm, especially when it is a friend, and see how the magic or influence works on them, but I don't feel the need to tell them that it does not do anything whatsoever for me. I don't want to dampen anyone's enthusiasm on anything but have my own, and some of them are not known at all or by very few so with Tuttle its like I am supposed to join the multitudes of some well established guru where I would rather witness a shaman practice somewhere in a tribe I can never be apart of but get so much of the feeling coming through me that I will be forever grateful to have witnessed it. If you think this metaphor is a little off base, I would point you to something I found in college in the VCU Rare Books collection - which as I just discussed with a member of the File Magazine group who now works at Printed Matter, is known to have started one of the best collections of artist's books in the country very early in the beginning days of the genre - the Holy Holy Art Cards where many revered artists were pasted on to Saint's heads and had quotes about what the artist had to say about spirituality in terms of their work. In Michael Kimmelman's At the Met with Richard Tuttle; Influence Cast in Stone Tuttle is described as a "shaman to many."

Then Kimmelman describes the work reproduced here in the article and Richard Tuttle's own associations.

"In 1983, Mr. Tuttle made ''Monkey's Recovery for a Darkened Room (Bluebird),'' a wall relief of branches, wire, cloth, string and wood scraps, which he says formally relates to the Met's diptych. ''The link is in terms of the organization of bottom, middle and top, the fact that the panels of the van Eyck are divided horizontally into three parts, and in a sense so is 'Monkey's Recovery' -- and maybe also in terms of having two vertical parts, the branches of 'Monkey's Recovery' being on one side and the wood on the other.''

Mr. Tuttle cites the German art historian Erwin Panofsky, who said that once you have van Eyck in your eye, Rubens is just another painter.


I am only interested in this piece of Richard Tuttle's because it nails for me why I have so much feeling for Lonnie Holley's work and why Tuttle has only tickled my forehead for a few seconds a few times and is gone. I am going to also quote Zora Neale Hurston here: "I pick up things according to my own juices and I sort through things using my own tools." So I don't owe anyone an explanation for this and quite enjoy employing a phrase that a Hungarian with a severely limited amount of english but an unmistakeably animated way of getting what he wanted to across, there is an enormous amount of work that reminds me of one of his favorite phrases, "don't care me." Having spent time in France and having grown familiar with the reflexive verb, I love this reflexive twist on "I don't care" - because their is a lot of work that causes me not to care. It is only the enthusiasts of any number of artists that are inclined to push me on a certain artist and I resort to this phrase relaying the tale of my Hungarian friend - oral to aural transmisson of it works great.

And just because van Eyck divided something in three parts and Tuttle wants to link his division of something into three parts directly to him doesn't mean that there haven't been The Ten Thousand Things made in three parts in between van Eyck and Tuttle, all over this globe, in all kinds of art making. (The Ten Thousand Things is a taoist term for an uncountably high number possibly standing in for the infinite by the way. Sol Lewitt made a piece with ten thousand lines for this reason and citation for example. Sol Lewitt makes me care very much for a counter example.) It just defies my belief that people still listen to this kind of thing!
Posted by Lori Ellison at 1:03 PM