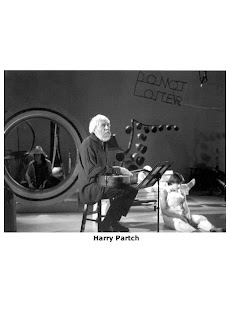 In 1980 I took a course called Media Synthesis with Vibeke Sorensen at Virginai Commonwealth University and there were two memorable documentaries she showed us in class, one on Professor Longhair but especially one about Harry Partch, which I have just found on You Tube. It is the one made in San Diego in 1968. There is also one for the BBC on You Tube that I had not seen before. I was in the Communication Art & Design Department, emphasizing graphic design and illustration that also at the time included all film, photography and interestingly enough alot of the conceptually based Time Art. The then welding and woodworking oriented sculpture department didn't want these instructors nor much of their students who were doing this stuff nevertheless in the 1970s. I also took tickets to the Ann Arbor film festival every year I was there so that I could see the whole thing after the first half hour each night in its entirety, so was not lacking in some kind of introduction to the avant garde from a different direction to the painters and sculptors I knew in the other departments. The painters called our department the sign painters nevertheless, while reading Irving Sandler's Triumph of American Painting or rebelling by getting interested in "Bad Painting" or Chicago Imagism. (There was a great group show organized by the rebel students titled "The Good, the Bad and the Ugly.") In the sculpture department the faculty was majorly interested and influenced by H. C. Westermann and Lucas Samaras and a lot of the young women excited by Ree Morton at the time, so it wasn't all formal welding and so on all the time. I tended to like it all - abstract and funky figurative - in the other departments, as an escape from the more heavy handed illustration and graphic design classes where we were supposed to imagine some purported audience from the point of view of an art director that would be engaging us, that I had to complete to get my degree and diploma and out of school.

It was also in 1981 that I talked a good friend from the CA & D department who was an R. Crumb fan and is now a comix artist and animator in New York into taking me on a freight hop, as someone who had grown up in what he nicknamed Dogtown in a part of Richmond near the train tracks where the kids in his neighborhood would go on hops up as far as DC and back starting at thirteen or fourteen. He said no women ("bad luck") but I wore him down ("Frank, this isn't a nineteenth century ship") and we went up to DC in an open boxcar to see The English Beat - a ska revival band from England. It was an all the way open boxcar with a vista as wide as the freight car itself. It would be hard to forget the fall foliage of Virginia and the dropoff view to the streams and small rivers along the way - nor the way I landed in the gravel when trying to disembark hitting the ground running as he showed me when we had to get off before getting caught in the trainyard if we had stayed on until it slowed down. I hit the ground running, but like a stick figure would - into the ground - impacting my knee and elbow and flipping over. I don't remember feeling much pain as we were immediately rushing to the concert, then in the concert and dancing. In those days I went to so many concerts involving stage diving and mosh pits in DC that I had just incurred the same kind of pain to ignore before, rather than during the concert, since it was not the Bad Brains or Black Flag or any number of other HarDCore bands in the 9:30 Club, but a group of mainly mod revivalists and mild yet vigorous ska dancing this time.

This is just to say I had not known until much later that Partch was our national dropout-of-the-music-conservatory hobo composer, who spent so many years riding the trains and collecting things he found to make instruments out of, in the documentary I din't remember the early conservatory years or trainhopping mentioned just the inventiveness of the instruments and the force of his personality and odd loveliness of the music. I am glad somewhere in the late eighties to have acquired this new information on Partch at the same time that my friend Frank continued to investigate his own freight hopping: as the only close friend I have who has been through all but three of the States on first a southern journey and then a northern journey and all his stories of riding the rails and even spending jail time once on the southern route, it is interesting to find my fascination with this culture I continued to hear and learn about through Frank and so much sculptural and musical invention in one legendary figure, Harry Partch.
Posted by Lori Ellison at 12:39 AM