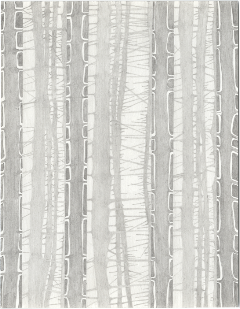 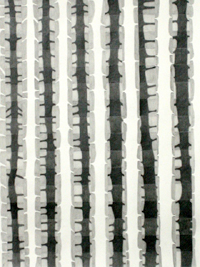 Katia Santibanez had a debut exhibition at Danese last fall after having shown with PPOW, Michael Steinberg and then in 2007 at Morgan Lehman. I had seen her work at Pierogi when first arriving in Williamsburg and of course New York and have followed her work with interest. The Morgan Lehman exhibit was my first opportunity to buy one of her works, albeit a very small print. Not only that but one of her recurring motifs in the more graphic and black and white work is very abstract but also very strongly abstracted from branching plant forms, so a train ride down to DC and then the change to a bus further to Richmond for a good friend's funeral service was this time of year in mid March with the nearly black tree silhouettes and still wintry grey that is almost white sky. I did have quite some time to have this rolling by bring me back to the palette and the rhyming motifs of the trees and Katia's branching works form a deepening memory of both her exhibition and this much needed time looking out the windows of the train and the bus. It was a form of contemplation, which is often discussed in abstraction, but beyond that, it felt a lot like something further and more absolutely necessary, in the sense of what one finds in a Wallace Stevens poem; it felt like consolation.
Posted by Lori Ellison at 8:04 AM