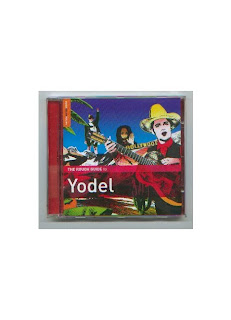 The past few days of this new forum have been a segue of thoughts and topics that remind me of my early formation in journalism combined interestingly with my stint as a disc jockey in the same period, and so I present the Yodelling compilation by the most excellent Bart Plantenga, who I learned and observed so much from in the days of Radio Libertaire in Montmartre in Paris - as only a several yearling DJ already a few years ago by the time I met him, I was a fascinated observer to the ways of his booth there, and a most grateful recipient of his ways of moving a dance floor by bringing in an entire sound system and critical massof vinyl to an enormous party I threw when I had the good fortune to sublet the architect Gaetano Pesce's spectacular Paris studio with two story windows and an apartment mezzanine. So in the spirit of Ray Yoshida and friends' "trash treasures" and by way of Joseph Yoakum and Hawaiian mountains, we will now segue into the Yodelling compilation by way of the cut "Hawaiian Cowboy" by the Ho'opi'i Brothers, who grew up on Maui, where the valley gave a natural echo, where the brothers went to sing as little boys. They combined traditional island chants, Christian hymns and paniolo (Hawaiian cowboy) songs and perfected their unique leo ke'eki'e falsetto style.
Bart's introduction to the Rough Guide following the paragraph where he states "everything you have heard about yodelling is wrong" is worth citing here:

After twenty years as a free form radio DJ, I realize DJs have few kicks: first the segue, that magical convergence ogf strange musics at first intercourse; and second, obscurity which involves discarded gems, neglected musicians or disparaged musics. Yodelling supplies the above in abundance. The segue occurs when yodels are discovered in genres not commonly associated with the style [i.e. jazz, rap, techno], producing instants of delirious anomaly. Obscurity is inherent to yodelling, having been systematically trivialized for centuries by the bourgeois guardians of good taste.
[...]Yodelling is textless vocalizing and is most distinguishable from other vocalizations by its emphasis on the noise or break that occurs as the voice passes from bass or chest voice to head voice or falsetto - or vice versa. This gives it a unique voiceprint, which coincidentally (and perhaps mystically) mirrors mountainous topography.

Since this compilation also includes Ed Sanders of the Fugs and Shelley Hirsch, I have to recommend it, as a former music writer who knows both these New York scenes, acid folk and downtown music through friends and recordings and audience participation since my early twenties, and this is the perfect time to defend Gillian Welch who is also included. She was attacked by Robert Christgau for coming from LA and thereby being fake - guess he doesn't know anything about how things migrate,- like Jimmie Dale Gilmore auditioning dozens of pedal steel guitarists for his first tour following the release of Spinning Around the Sun, and proudly introducing a very young man from Sweden, who got the sound he was looking for just right, every night he performed. My mother and her first cousin Alberta sang Appalachian songs from where the family was from in Beech Fork and thus to my well trained ears Gillian is bringing it through pure and fine. Bart has also written a book entitled Yodel-Ay-Ee-Oooo: The Secret History of Yodelling Around the World (Routledge 2004) and is working on a second volume and a documentary, and still jockeying the discs at Wreck This Mess in Amsterdam at radio Patapoe. Le college de pataphysique and Oulipo will be on the shelf as cabarets in this cabinet of my curiosities so any rhyme with patapoe in this forum will be intentional.