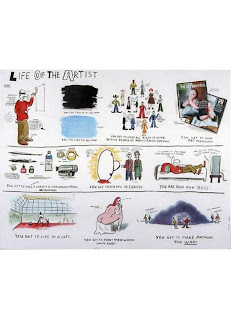 I loved Jim Torok's work from the first, both the intimate portraits with detail found in British miniatures of the 17th and 18th century, and the big nose comic character, the crudest portrayal in comics since Lynda Barry, whose first book Boys and Girls I bought at Printed Matter in the early eighties when it was on Lispenard Street. Only Jim was doing it on big paper and panels with a paintbrush.

Many of these would be about being an artist in New York, from a generalized standpoint, and quite good satire or wry humor. Wry humor would be how I owuld see this one I found on the internet posted by a young blogger, if I had not seen it shown at Bill Maynes Gallery when I saw it with its dark twin in black and white about how terrifying it can be to be an artist with everything in this panel its near opposite. Which is far closer to the truth for nearly every artist who came here if not actually than existentially - wish I could find that one and post it as well.

He nailed some of the worst experiences of art openings that I had experienced or witnessed without thinking quite consciously about it in one painting I have not been able to find in either his catalogue from Peirogi (worth seeking out) or online, but I only remember vividly the head swiveling motion lined head facing the Big Nose Every Artist, the effect of not focussing on the one who is talking to try and scan rapidly for people it is of utmost importance to talk to, and then the angling for where there might be an after party to go to.

See also his sendup of well known stunts to make one famous in the art world, or at least a news item for that year or so until the next stunt comes along. It was published in another form in Art in America under the Pen and Ink page before that delightful satire on the art world series came to an end just about a year ago.
Posted by Lori Ellison at 11:27 AM