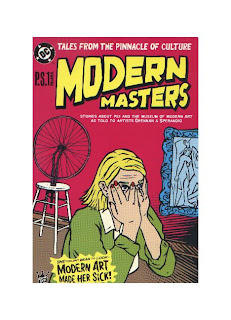 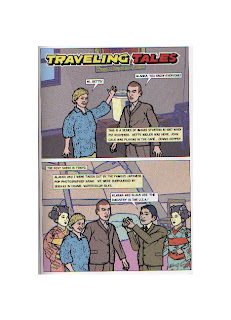 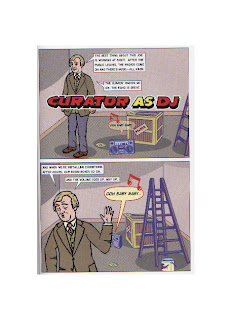 This is still at the MoMA Bookstore, a one time only collaboration between MoMA, PS1 and DC Comix made at the time MoMA was in Queens awaiting its controversial new space and architecture.

Three curators who worked so many years so astutely and intelligently to bring the public in its more expanded sense art important to the present moment, whether 20th century historical or absolutely new in the case of MoMa. I fear now all we have in their place are curators with their eye on the momentary present.

I am reminded somehow that the British word for curator was keeper, and that the current term curator has lost its custodial sense and long view somehow, that something might be for keeps, if one is modest enough somewhere to not want to be a curator as star in one own's right.

Saul Ostrow wrote an excellent article in the New Art Examiner titled Curator as artist in the mid nineties, and after he had done a presentation to the Tyler student body, I told him how much I liked the critical argument in the article (not mentioned in his talk) but asked him if auteur might be a better term. That was well past a decade ago; however Richard Sennett discusses this phenomenon in terms of politics in The Fall of Public Man, and all influence and power is more political now as imedia predominates and inherited and legislative power give way to charismatic in so many other arenas. (Max Weber's three forms of power, discussed in Sennett at length.) Charisma can be eloquent or it can be paranoid and find its target audience, in the art world it is unfortunately an academically competitive and increasingly globally capitalist admixture, without deep art history and a long view and large picture and understanding of a multiplicity of points of view, the eloquence of what is exhibited, written about the exhibits, and the public speaking and interviewing drops.

Glamour needs pleasure yet harmony spreads contentment. Perhaps the recession will bring a moral correction not just a market correction.
Posted by Lori Ellison at 2:04 PM