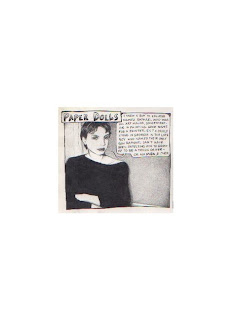 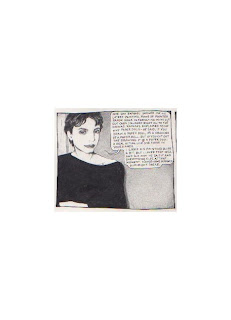 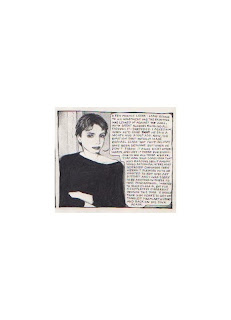 The only comic strip in the early eighties I ever did related to "art" is based on a painting student I knew in school - I wasn't in the painting department. Since the lettering breaks up, the text is panel by panel:


[I knew a boy in college named Raphael who was an art major, concentrating in painting. Good name for a painter, eh? A couple living in Georgia in the late fifties who named their son Raphael couldn't have been expecting him to grow up to be a truck driver - or an MBA either.

One day Raphael showed me his latest painting, rows of painted paper dolls alternating with cut out ones collaged right on to the canvas. Raphael explained why paper dolls - he said, if you draw a paper doll, its a drawing of a paper doll - if you cut out the drawing it IS a paper doll. A real actual live one there in your hands.
I liked his painting quite a bit, but I loved that idea. And the way he said it and everything else at that moment. I could have hugged him right there.

A few months later I came round to his apartment and the painting was leaned up against the wall, with great slashes running through it - shredded. I asked him when he had done THAT. He said about a month and a half ago. Now the emotion that initially made Raphael slash that painting may have been genuine, but when he didn't throw it away right afterwards, and left it there for all to see all those weeks, that was self-conscious. That was reading about angry young action painters who destroyed canvases they weren't pleased with. He wanted to buy into art history and I was sorry to be a witness to that. Poor Raphael, I wanted to hug him again, but for a completely different reason this time. It would take him years to get untangled from art history and back on his own again.]

This is interesting to reread now as I made this only a year out of college and therefore only a few years after the actual events: the kernel observation is based on a true experience; the name, impulse to hug and denouement an attempt at fictionalizing. No impulse to hug the first time, just a real nice fascination, and no affection there the second time when I saw what he had done to a painting and an idea contained in it I liked so much. I was a bit angry he had done that to a very promising Jasper Johns like path however when he ended up doing handsome paintings that were Diebenkorns with fluorescent paint it seemed clear to me there wasn't much point. I mean they were handsome but my mind stopped every time I looked over them with the thought, "but these are Diebenkorns with fluorescent paint."

This was not published in the Austin Chronicle along with the others as I had moved to France and dropped interest in sending them in by then. It wasn't a favorite with the editors or general public anyway - as I said the others weren't about art or art school. They were all stories told by younger and older men and women based on anecdotes from family, friends, or my own life, matched with photos I clipped from different sources to draw the faces and upper bodies from as the idea was someone across from the reader talking one to one. Any anecdote was good as long as a subtle humor was involved, which I suppose to have been initially mine. (After publication I was pleased that it was so generally shared.)

Artists I have met in the latter act of my life used to ask me what I did before I started painting at 27, and I could say the simple answer is, a lot of living, and a freer form life - and a lot of listening to others. Its all there in memory, and some of it recorded in the comic strips from that time. It is interesting being a world of remembered anecdotes, my own and other people's, in a city, period, and art world culture that doesn't have time for it. I continue to remember the ones I have been told up here by so many, and have long since stopped being surprised when it isn't in memory that I have ever been the one who listened, as many are surprised by what kinds of dialogue I can pull up from conversations years past verbatim.
Posted by Lori Ellison at 9:21 AM