Hairy Who, Oyvind Fahlstrom and Installation 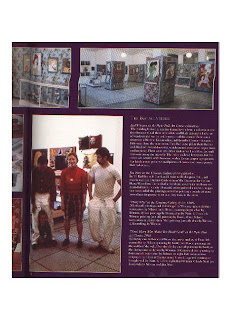 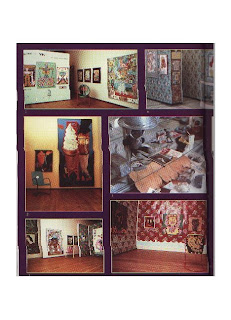 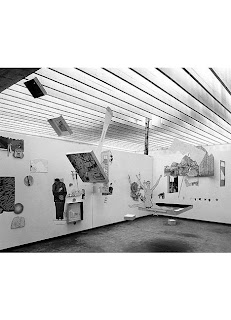 There is an essay to be written about installation I would like to do starting with the Salon des Incoherentes in 1870s Paris, but I am not inclined to do it now, just that here are two important installations by the Hairy Who from the late sixties and one by Oyvind Fahlstrom from 1964: certainly these two would be part of my timeline of installation ideas for exhibitions in an essay I do hope one day to tackle. (Different from installation art, which has become a genre). I am someone who loves to research things - the amount of reading I have done and things I have discovered for posting has been rewarding in ways I couldn't have imagined even as someone who has done this in a less focussed way all of my life.

I am going to use this opportunity to quote from Dan Nadel's interviews mentioned before in The Ganzfeld, where he asks certain members if they were influenced by H. C. Westermann, but more interestingly, Oyvind Fahlstrom and Peter Saul. The reflections on Saul I am going to record along with some postings on his work quite presently, having seen the small retrospective in Philadelphia (perhaps awaiting the big one) and his two shows in Chelsea at George Adams and Nolan last week - however, with Oyvind Fahlstrom it has been a shock continually to me how underknown he continues to be in the last few decades, even given his early death in 1975. I had too many artists I knew so thrilled with Inka Essenhigh's early work, and so unwilling to listen to my version of it - which I pointed out as bits of bodies and figuration straight out of early days of Metal Hurlant magazine (first imported to the US in the seventies under the name Heavy Metal). These are artists I could name if someone handed me the issues from my trace memories of looking at it myself. Her later work in fact has never gotten past this rendering style based on at most two maybe three of these French comics artists, and in fact only developed into some large scale tableaux images with all the implied motion frozen in the center, still sticking with the basic thematics of comic book genre, while her color sensibility is just monochrome grisaille composition with various colors replacing the grey. The first work of Essenhigh's had body parts and figurative elements strewn on a nearly John McCracken finished rectangle making me imagine them on a car hood. So I would try to tell everyone she should look at Oyvind Fahlstrom after this initial description and no one knew who he was.

Finally, working at Hacker Art Books about six years ago I was talking to my friend and coworker Hector Romero about what Inka Essenhigh's work could be like if she looked at Oyvind Fahlstrom and we pulled out a monograph and found we had both been fascinated with Fahlstrom's work from some complimentary directions, especially the political. Hector is the same age as the others I had been talking to, that is roughly ten years younger or a little more than me - I am fifty this year so this was when I was forty and they were thirty about ten years ago. Hector was different - working full time at Hacker's Art Books and now the Strand in the art department is a continuing education unlike any other - he helped me find the Assemblage book I needed for this forum when working on the Ad Hoc Shop. Hector Romero has a website and I recommend his drawings having seen them in his studio and now on this site, and any questions about Art Books he is a very good source in the Strand Art Department.

It is such a pleasure to segue in music fashion from the Hairy Who into Oyvind Fahlstrom as a next posting tomorrow through the graces of Dan Nadel's interview; here are their views on Fahlstrom and what he meant to them at the time:

Jim Nutt: "I don't know when I became aware of Fahlstrom, but it was from reproductions, since none of it showed up in Chicago until 1967 at the opening show at the Museum of Contemporary Art. I remember liking what I saw right away. At some point he visited the Art Institute of Chicago and he asked to see the Hairy Who show up at the time (maybe the '68 show).
For the life of me, I can't remember why I didn't go hear his lecture (I was out of school at the time), unless I have misremembered and he came after we were on the west coast (...) In any case, Whitney [Halstead] reported that he looked very carefully at the show, liked what he saw but never cracked a smile. (Perhaps he was very polite and thought it bad form to say anything negative under the circumstances.) He was apparently a very serious person."

Gladys Nilsson: "I always liked the idea of the Fahlstrom magnetic stuff: game boards thst the viewer (owner) could fool around and play with. What fun, and fun is good. Comedy is good."


These are badly scanned images of several installations the Hairy Who did including a show at the Corcoran at top left of the second image, and a photograph of Karl Wirsum playing with Claude Nutt next to Gladys Nilsson and Jim Nutt.
The installation by Fahlstrom from 1964 is still so elegant and radical it floors me. I can't get over looking at these three images and apologies for the scanning quality. Absolutely anyone interested in the Hairy Who should buy this issue of the Ganzfeld right away. Gabriel, the owner of Desert Island Books (who pointed this issue out to me) and I were wondering why there has not been a book yet, perhaps Dan Nadel will do one.
Posted by Lori Ellison at 7:11 AM