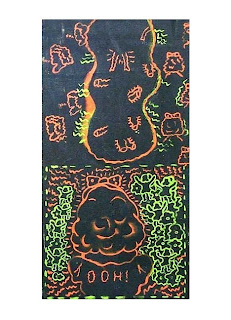 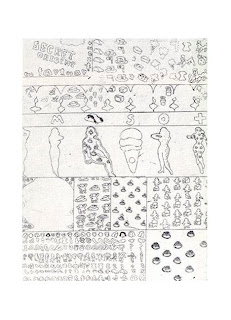 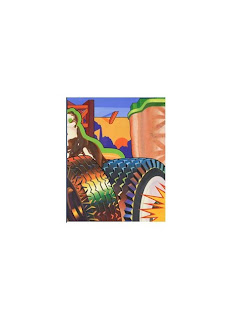 The current issue of the Ganzfeld has a long reportage article mainly consisting of interviews with Jim Nutt, Gladys Nilsson, Art Green, Suellen Rocca and Karl Wirsum, titled the Hairy Who's History of the Hairy Who, by Don Nadel. There are for the first time in print photographs of their famous installation in 1968 exhibition at the Hyde Park Art Center, where my friends and I had famously communicated by word of mouth things read about the kitschy wallpaper backdrop to the paintings, the comic books, the pricing, and all kinds of subversions to the art world exhibition and marketing and High and Fine art as usual. So amazing after all these years to see the actual photographs of something we were so much fans of in Richmond, Virginia in the late seventies and early eighties. We were enrolled in various art departments at Virginia Commonwealth University, and inspired by the Chicago artists' exhibitions in the late sixties that we tried so hard to envision.

The interviews clear up some disinformation that I remember hearing right at the time - especially the legend that they named themselves like a rock band. However, that was a legend we could use at the time; having thrown ourselves at some point in the late seventies into all things new wave and punk, and John Waters films and Bruce Conners' film for Devo's Satisfaction. In the graphic design courses I was taking we went from teachers imposing Helvetica and Swiss International Design as they had for several decades against all rock poster and pop influences from any direction whatsoever, to April Greiman, Wet Magazine (the Magazine of Gourmet Bathing) and all things in the New Wave design, in just one year - 1977 was the first and 1978 was the second. It blew both the faculty and students wide open forever, to all the neo-constructivism or historical influences from the past, and all innovative new trends for the future. This made it all exciting in a way that only precomputer design trained graphic designers could possibly understand; but it was something happening also in all the arts and in music and culturally all over - the opening back up of the past as an incredible stomping ground for re -envisioning and reinterpretation against an outmoded ever "progressive" future, simultaneous with a future made more exciting and freestyle by throwing off entrenched and petrified ideas of this progressive future dating to the forties, fifties and sixties by this time.

All of the East Village nascent scene, and its sources in the Secret History of Pop painters Peter Saul & Oyvind Fahlstrom, Bad Painting, what came to be called New Image Painting, Funk Art, Mail Art, and Chicago Imagism burst into the VCU Painting Department at this time which had been dominated by two more conceptually bent Photorealists and four Triumph of American Painting text and role model driven abstract painters. The students organized a show with the excellent title The Good, The Bad and The Ugly and in this well hung and packed (in all three senses of the word) exhibition, these rebellious undercurrents were in full force.

I had just joined the college newspaper and reviewed every band in Richmond I had seen and had enough musicians I had hung around with to know quite a lot about the talk style of bands. The story of how they ended up with the name of the exhibition in the interviews in the Ganzfeld does clear up how they named the exhibition itself and ended up sticking with the moniker and it was not like a rock band in conception, but the conversational style they described amongst each other and the "aha" moment with Karl Wirsum and the others is similar to how bands spend so much time hanging and talking and develop an enormous amount of inside humor, and even how they grope for a good name and have a narrative of how they finally found it. So our original inspiration of a group of artists that band together in a way musicians have for so very long had a kind of verity of its own, this still remains a singular instance of visual artists bonding and presumably with this issue of the Ganzfeld and their continued base in Chicago and contac with each other, for life.

As we were all listening to and dancing to and going to see local and touring versions of this new music we loved the idea of a group of artists hanging out together like a band and working with a shared sensibility but mastering their own instruments and voice, as a great metaphor for drawing and painting - and friendship. The art director of the college newspaper was a painter but two of us were from the CA & D department - Dale and Ronnie were actually roommates and we did all the grafix and comix mainly with just a few others let in. ronnie was black and this makes me laugh as a kind of grafix takeover of the newspaper version of the Mod Squad. Ronnie and I were in CA we had friends studying animation and the comic art fervor was actually in courses like a History of Animated film Shorts class I took, and Dale was doing paintings that were rather like Peter Saul's palette reinterpreting Picabia, but that was the core of the three of us as Hairy Who fan club central in Richmond, and for me the fact that Suellen Rocca and Gladys Nilsson were integral members from the start was the really amazing and inspiring thing.

Suellen Rocca is the only one to start off her interview saying the single most important influence on her was Ray Yoshida. (Please scroll down and see the postings on Ray Yoshida, Joseph Yoakum and Hawaii for an important footnote to this, in my life as an artist, but for anyone with in depth curiosity and interest about Chicago Art, starting with the Monster Roster and ongoing.) After telling Mr. Nadel that her parents were both jewellers, she said she was really interested in the catalogues and the illustrations and pictures of jewelry, and catalogues from Sears of bras and girdles, and then Kindergarten readers, so she would have all these sources of fascination with childhood looking and reverie on her studio walls.

The first two images are from her work that I remember, as are the reproductions in the Ganzfeld; the last one is her newest work which has something that reminds me of Rosenquist as in the first block of Art Green's below, but has still a lot of her image repertoire - it is hard with both Art Green and Suellen Rocca to see their work without removing the lens of attachment and nostalgia to the old work. This is always a process with nearly everyone as it is hard to be flooded with enthusiasm the way one was in youth, but as an artist there are imperatives involved when work changes this much and the time between has been so long.

By entering the actual paintings with longer looking and a willed opening up I do feel I can pay the respect due and understand them better from inside the work. Still, it is hard to listen to later music by bands one was once passionate about, see later films by filmmakers one once was breathless (reference intended) to see the next appearance of in a film series or cinematheque, and if one is a painter, well...I will say I am so pleased to post this painter as one of my first women role models in painting along with Gladys Nillson. They were the two, they as a dynamic duo gave me a way of entering the whole endeavor of painting with oil on support from having majored in the CA department. Nearly all my friends were in this department and we were intensely engaged in photography, design 2D and 3D, media, animation, film, illustration, comics and all kinds of other technically and conceptually difficult projects, sometimes all simultaneously and with insane deadlines all coming around every week we were there, with the free for all enrollment of those days, and the seventies major recession pressure to get out in four years and find a job immediately breathing down our necks - we all knew quite well that one floor above us - the legends in their own minds in the Painting Department - called us the "Sign Painters." Thank you Suellen and Gladys, for looking at primitive art, self taught art, comics art, but especially, especially all that illustration and design for popular, commercial art culture and for what almost all of us young women who entered the CA & D imagined trying to do for a living - illustrate and even write children's books, by way of illustrating children's schoolbooks for a living first.
Posted by Lori Ellison at 7:05 AM