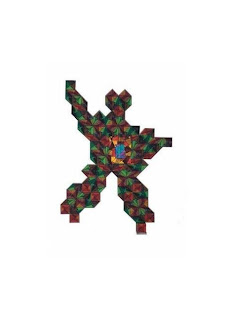 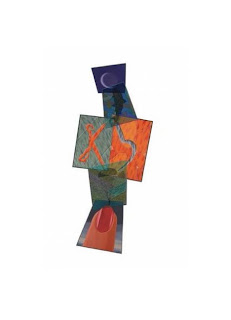 Art Green was the least known to me of the Hairy Who and all the Chicago Imagists. (A taxonomically imposed name like so many others writers come up with after the fact.) When first starting this blog I had read Ray Yoshida's obituary and posted at length on Yoshida, Joseph Yoakum and Hawaii.

My earliest attempt to paint to put together some of the comics I was doing with several friends from the painting department who were at my college newspaper, dancing couple panels, and some figurative mutations like the now underknown woman comic artist M. K. Brown from National Lampoon and Jim Nutt, with a palette completely swiped from one of his ultra violet black light suffused paintings I had been mesmerised by in a group exhibition at VCU's Anderson Gallery.

I had discovered a Comix and Grafix Bookstore in my neighborhood on Metropolitan in my neighborhood of Williamsburg not far from the famous Crest Hardware store called Desert Island. I can't recommend this store enough - I have Spoonbill & Sugartown on Bedford practically memorized and sift through the used books as they come in there, so I am happy to walk into a store as packed as this one with new things to discover. Two weeks ago I stopped in to inquire after comics having metacommentary on the art world and the owner Gabriel had recommended a book with an entire segment on a critique at Chicago Art Institute which I will spring on everyone in the Comic Relief section planned just after this group of postings - the intertwining of Chicago artists and pop culture and comics is a perfect segue into a respite filled with recession funnies.

It turns out Gabriel had also gone to the Chicago Art Institute and showed me a copy of the Ganzfeld with the installation shots from the original exhibitions and a series of interviews with several of the group of friends clearing up some of the usual disinformation. The next paragraphs are from Jim Nutt's writing as curator of Art Green at Cue, since I had posted Victor Kord at June Kelly and a meditation on Matisse (and much else) on either side of Marina Adam's show at Cue - an interesting twist on the alternative space.

I was struggling in a first year painting class, desperate to do anything that looked better than half baked, when I became aware of some movement behind me at the back of the room. Though the interlopers were unknown to me, I slowly became fascinated with the distraction. They were silently removing a painting from the storage rack, giving it close scrutiny, and with the aid of animated gestures, argued in hushed tones the vices and virtues of every square inch of the painting at hand. And there was some giggling. I had never seen such a lengthy and animated examination of a painting. Needless to say I was impressed and hoped to make their acquaintance at some point. Fortunately I did, eventually discovering they were fellow first year students Cynthia Carlson and Art Green.

As I came to know Art, I realized how common this sort of behavior was for him. When he became interested in something, say an image or idea or their relationship, he would follow the interest wherever it went. Invariably, his progress would begin to double back on itself, and he would then find himself proceeding in the opposite direction. Then on to a variant, and then another and so on. It wasn’t exactly willy-nilly, though at times it appeared so. Open ended investigation of this sort quite often leads to a state of confusion in most of us, but for Art it leads to possibilities, often to multiple paintings, each nailing one or another destination. It is not surprising he would become fascinated with the potential of the oscillating illusion of necker cubes or find time to ponder if it is better or worse that a rolling stone gathers no moss.

Curiously his paintings are simultaneously both easy and difficult to look at. At first glance, there is a firmness of purpose and legibility of means that suggests casual grasp is possible. They seem to be and then are easy to read, encouraging a closer look. But this leads to my realization that something’s not quite right, but then it is. I have left easy-read and am now in the painting.

I experience this every morning when, half awake as I meander down the stairs, I find myself slipping into a new part of his painting which hangs on the wall at the foot of the stairs. I may experience the painting whole for a moment, but before I can help it, I‘m in, traveling yet another previously unnoticed path. What a treat!
Posted by Lori Ellison at 1:16 PM