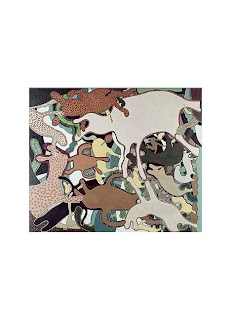 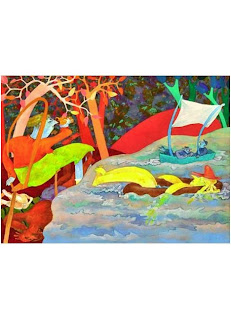 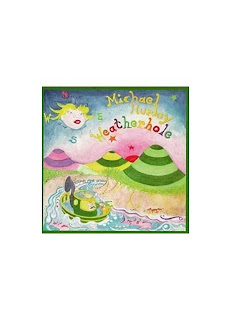 From one of Gladys Nilsson's latest press releases for an exhibition in Chicago just two years ago:

"Whimsical" is the term probably most often used to describe Nilsson's watercolor paintings and the artist enjoys a good pun, visual or verbal. Her figures have gangly, limp-noodle-like arms and legs. They are gawky yet graceful. And Nilsson's subjects are ordinary but at the same time serve to effectively represent basic human feelings and interactions. Her compositions always involve humor or irony, and the artist frequently makes fun of herself. As put by the Tory Folliard Gallery about Nilsson, "each work of art celebrates the artist's unending curiosity for human behavior: rituals of courtship, gastronomic delights, and narcissistic passions."

In the 1960s Nilsson was a founding member of the "Hairy Who," a group of artists who also came to be known as the Chicago Imagists and the Monster Roster. Although acknowledging the significance of being identified as a member of the Chicago Imagists, Nilsson has said that she prefers to think of herself as an individual, not as part of a group or movement. Since the '60s Nilsson has gone on to exhibit in over 200 solo exhibitions and 400 group shows, including at the Smithsonian Institution (Washington D.C.), Whitney Museum of American Art (New York City), Los Angeles County Museum, The Museum of Contemporary Art (Chicago), Institute of Contemporary Arts Center (New Orleans), James Mayor Gallery (London, England), and San Francisco Museum of Art.

For younger audiences Nilsson might better be known as the artist who did the drawing found on the inside of the CD cover for Wilco's release "A Ghost Is Born" and for her interview which is included in The Wilco Book.

I have added a CD cover by my friend Michael Hurley, who had been drawing comics with his older sister who taught him to draw and then kept it up for life, and who is a cult figure amongst the current revival of "freak folk" musicians, because his drawings and paintings remind me in source and in spirit of one of the ways Gladys Nilsson has painted and rendered - she has several, and has kept them all going, since the beginning. An unrecognized prolific and reverie inducing, yet thoroughly idiosyncratic painter. I have had so many discussions lately about how little artists are really allowed to be idiosyncratic, in the deepest sense of the word, in the new pluralistic yet thoroughly taxonomic art world we are in. As if idiosyncratic making - and the being and existence it springs from - have nothing to do with originality. Which was the original Modernist project, after all.
Posted by Lori Ellison at 6:30 AM