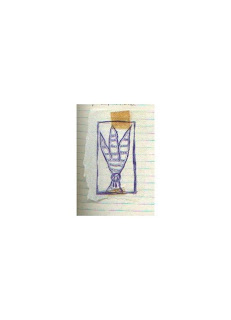 This is a drawing I did in 1981 on a napkin, on the counter, while sitting at the Tahiti Bar in the red light district in Honolulu, chatting with the owners Coby and Maureen, a dyke couple who met in Hawaii. Coby was a former stewardess on KLM - Royal Dutch Airlines and Maureen from North Carolina farming folk - she showed me around their farm on the dry and rural side of Oahu and I photographed all the goats and her milking them and the huge wooden press for making goat cheese. Sitting next to me, I was really digging the enormous bride of sumo wrestler sized drag queen in a mumu with a black beehive tall enough to match her Hawaiian queenliness (an actual Trivial Pursuit card - what state in the US had a King and Queen?), but as I had real difficulty understanding her dialect and had to get down this tapa cloth motif hanging behind the bar we didn't get much chance at a real conversation. I think she understood the intensity of my trying to draw with ballpoint on napkin in low lighting and it was all wonderful and marvellous, all of it.

I wish I could post some Ray Yoshida work so the tapa cloth, Joseph Yoakum and Ray Yoshida's oeuvre would all come together for anyone who is out there reading, but the internet is good for this for anyone interested in seeking out Yoshida. Just think, he came from Hawaii and had his formation in Chicago to work to bring his good news to the world - who does that remind you of currently?
Posted by Lori Ellison at 7:54 AM