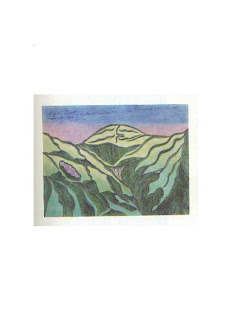 The Joseph Yoakum painting posted here is from a small book devoted to his work published by Janet Fleisher Gallery in 1989 entitled Animistic Landscapes.

Following the section on Ray Yoshida in Russell Bowman's essay on Chicago from
1945 - 1975 is the section I will cite below:

The Discovery of Joseph Yoakum:
Although Joseph Yoakum (1886 - 1972) seems first to have been noticed by Karl Wirsum, Jim Nutt, and Gladys Nilsson, Yoshida visited the Sherbyn Gallery in 1968 and was, like them, immediately taken with Yoakum's work. In turn Yoshida brought his younger friends Brown, Ramberg and Hanson, and thus began the Chicago Imagists' deep involvement with the art of Yoakum.
An untrained artist living on Chicago's South Side, Yoakum claimed to have been born on a Navaho reservation, to have traveled with the Ringling Brothers Circus, and to have taken up drawing late in life after having a dream he called a "spiritual unfoldment."
[...]When asked if the faces and profiles that often occur in Yoakum's geological forms were correlatives of the faces and profiles that appear in his own work, Yoshida replied, "yes there must be a connection."
[...]Above all it is the sense of animism pervading Yoakum's work that Yoshida seeks to achieve in his own. His interest in animism arose from stories he heard as a child in his native Hawaii, that frequently included spirits of places, particularly of mountains. interestingly Yoshida's first purchase of Yoakum's work, from the Sherbyn Gallery, was Mt. Mauna Kea in Volcanic Range in Central Hawaii County of Hawaii Islands.
Posted by Lori Ellison at 11:59 AM