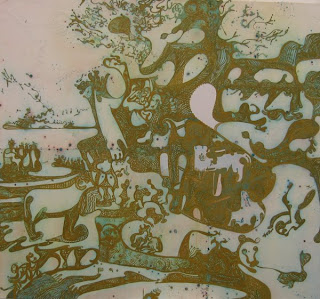 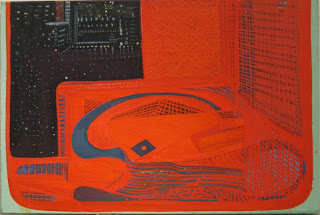 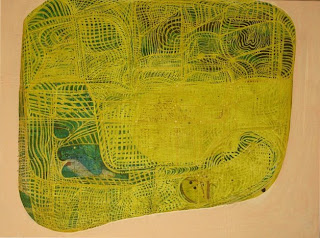 These are three paintings by Sharon Horvath, who is one of the first painters I met in New York through Leslie Roberts and Robert Guillot, and may have been my first studio visit as well. I had met Garry after seeking him out as an interesting artist in the group show mentioned below and said he might like Sharon's work - one would have to be more familiar with both artists' oeuvre and works on paper and paintings from that time, but there is a symbolizing abstraction and animism both have in common and both are currently at Sideshow, and they have indeed met through the expanded art world circles.  (Perhaps I like being a bit of a yenta for artists despite having only been here twelve years.  Certainly part of the motivation for curating shows.)
Titles are:  Peaceable Kingdom
(for Edward Hicks)
A Summer
Red Planet Copy
Posted by Lori Ellison at 5:05 AM