Back to School Comix for Art Instructors and their Students 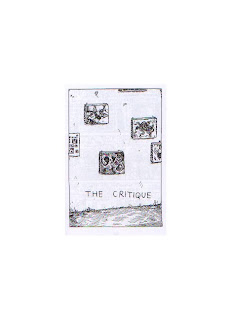 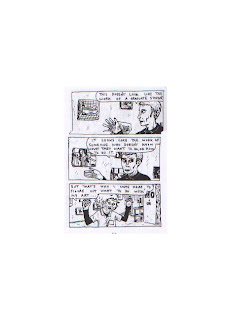 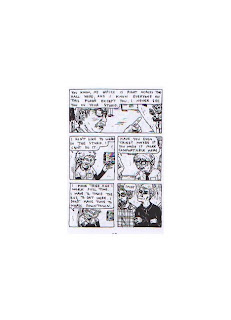 A few years ago I had read James Elkins polemical book Why Art Can't Be Taught: the premise that it can't be taught because there isn't any way to measure achievement in art empirically seemed like it must be either his elaborate devil's advocate stance or just plain silly didn't mean that every page of the book wasn't worth reading: it is after all subtitled a Handbook for Art Students.

The absolute juiciest part was his longest chapter - a point by point dissection of critiques with actual dialogues presumably recorded at Chicago Art Institute where he is professor in Art History, Theory and Criticism to illustrate nearly every one of his points. the most memorable two being A Critique is Like A Seduction, Full of Emotional Outbursts and Critiques are either Judicative or Descriptive, with the courtroom trial aspect documented quite viscerally.

He develops beyond all this a very strong argument for the critique of The Critique, an ordeal both Instructors and students go through once hired by or entering into art school, and I would add parenthetically that it has been clear to me when in them that the instructors use techniques their most influential instructors did with them either with the conscientiousness that new parents bring to what they reflect of their parents for good and ill - or as unconsciously - and usually with the same kind of negative reactionary results. All of us are human and subject to both, but it must be under a certain amount of control and discretion to be of benefit to students at all. A minefield sometimes for everyone seriously engaged but especially the increasingly poor students that attend - I mean poor as in facing unbelievable debt loads and an increasingly shrinking means of earning a living above all in the marketplace of collectible unique objects.

So this is from Jeffrey Brown's latest book Funny Misshapen Boy I bought on recommendation for this series from Gabriel at Desert Island Books in Williamsburg - Gabriel also went to Chicago Art Institute, as did Jeffrey Brown. I had already tried in the mid nineties as someone in graduate school in my mid thirties to explain to some of my instructors how different it was from when I went to a state University Art Department for $12.00 to $17.00 an hour in the latter half of the seventies.

No one in this comic sequence at left culled to demonstrate exactly this dilemma, from the pages and pages of all too true words from the crushing critique style many instructors still practice without thinking from times when they could a) afford tuition, b) not work full time or often even part time due to low tuition, and c) leave home and be free enough in time and their own apartment or dorm room space to to work the hours and hours needed in their classroom or especially graduate school studio practice to even get anything at all from their instructors either during class or in critiques.

Hard times, and getting harder, for students - coasting on your own hard won but perhaps too hardhearted or lazy minded or both conditioned response pedagogical style is not what your salaries are coming in to your personal coffers for. It would be appreciated with the spectacular burden of debt for an undergraduate degree and then MFA from some prestigious school the BFA students are encouraged by their faculty to apply to consider their style of conversation, as art is meant to be an open dialogue not a public shaming device.
Posted by Lori Ellison at 9:58 AM